Virat Kohli registered his first ever win as Test captain of India.

Indian players Virat Kohli, Harbhajan Singh and Stuart Binny spent some time outside a cricket field when the rode a Tuk tuk on the streets of Colombo. Sri Lanka are currently in Sri Lanka to play three Tests. Having lost the first Test at Galle, India bounced back extremely well to win the second Test ar P. Sara Sara Oval to level the series at 1-1. The second Test was also the final match for Sri Lanka legend Kumar Sangakkara, who signed off with 12,400 runs to his name. It was an emotional send off for the stylish batsman in front of his family and friends. READ: Muttiah Muralitharan puts Arjuna Ranatunga ahead of Kumar Sangakkara

India had a perfect finish on the fifth and final day of the Test. Angelo Mathews was dismissed on the very first ball of play on Day Five and that set the tone for India. Virat Kohli kept ringing in the changes, and his move to bring Amit Mishra into the attack worked as he bowled Dinesh Chandimal round his legs. India kept the pressure on and after a brief stand between Dimuth Karunaratne and Lahiru Thirimanne, the hosts lost wickets far too easily. PHOTO: Kumar Sangakkara, Virat Kohli share a light moment

India set Sri Lanka a target of 413 when they declared after scoring 325 runs losing eight wickets. India’s main contribution came from the 140-run stand between Murali Vijay and Ajinkya Rahane. Vijay missed out on his ton while Rahane ensured that he notched up his fourth Test ton to help India build a solid base. The lower order chipped in with handy runs as Tharindu Kaushal and Dhammik Prasad both finished with four wickets each. Sri Lanka were reduced to 72 for 2 at stumps. Kaushal Silva did not last long but it was Sangakkara whose dismissal led to an emotional breakdown for the Sri Lankan fans as he was out for mere 18 in his final Test innings. VIDEO: Kumar Sangakkara’s final dismissal 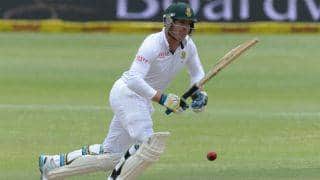 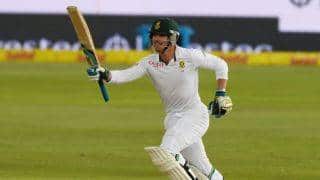