Mahela Jayawardene had to face Zadran's 136kph back-of-a-length ball which he defended it with a push.

Afghanistan bowler Shapoor Zadran may have rattled a few stumps in his life, but he might have never thought that his ball would snap veteran Sri Lankan batsman Mahela Jayawardene’s bat into two!

Batting on 43, Jayawardene had to face Zadran’s 136kph back-of-a-length ball which he defended it with a push. But the impact caused the bat to snap and a part of the willow landed near the middle of the pitch while he was left holding the handle and the top portion of the bat.

Following this, he got a new bat which turned out be quite lucky for him as he scored 57 runs more to completed his 19th One-Day International (ODI) century and fourth in World Cup.

His match-winning century and a 126-run stand for the fifth wicket with captain Angelo Mathews ensured that Sri Lanka won a hard-fought battle by four wickets against an inspirational Afghanistan bowling attack.

His innings earned him the Player of the match. 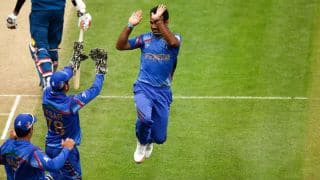