Sri Lanka won the 1996 World Cup without facing a single defeat, which was a huge achievement considering they were not even amongst the top five contenders for the title.

The 1996 Wills Cricket World Cup was played in the Indian subcontinent for the second time, after 1987. This time, however, Sri Lanka were a co-host, along with India and Pakistan. The tournament completely changed everyone s thinking as to how to approach the limited-overs cricket, especially the first few overs while batting. The architects of this revolution were the Sri Lankan players, who played fearless cricket throughout the tournament with an all-aggression approach. They eventually won the World Cup without facing a single defeat. This was a huge achievement considering they were not even amongst the top five contenders for the title. They beat the mighty Australians in Lahore exactly 21 years ago. On the historic day, Chinmay Jawalekar looks back at the game which was much more than just a cricket match for the then trouble-torn Sri Lanka.

The Wills World Cup was special in more ways than one. India and Pakistan, hot favourites to win it, were the main hosts. It was the first time that more than two nations were hosting it. With India and Pakistan having hosted the 1987 edition, Sri Lanka s addition for the 1996 tournament made them the third co-host. However, the Central Bank Bombing that took place in Colombo on January 31, 1996, changed the situation completely. The deadly attacks carried out by LTTE during the separatist Civil War in the country killed around 100 and injured over 1,000, thus raising serious security concerns for the touring countries during the World Cup, which was due to start in a fortnight.

Sri Lanka, who were placed alongside India, Australia, West Indies, Zimbabwe and Kenya in Group A, were supposed to host four of their five group games barring the one against India. While Zimbabwe and Kenya agreed to travel to the island nation, Australia and West Indies pulled out citing security concerns. Sri Lanka were not impressed with their decision, as ICC had already declared their venues safe. The fact that a combined India-Pakistan team toured Sri Lanka to play a goodwill match did not help. A lot of negotiation followed but to no avail, as both the teams stayed firm on their stand of not traveling to Sri Lanka. As a result, both games were awarded to Sri Lanka, which meant they as good as qualified for the knockouts even before playing as all they needed was a single win from their three matches, out of which two were against weaker sides.

As expected, Sri Lanka got past Zimbabwe with ease and qualified for the knockouts just after their first league game as their next two games against Australia and West Indies were forfeited. Their next game against India was their only big game in the league stage. They entered the match as underdogs and walked out as winners, stunning not just India, but the entire cricket fraternity. The hosts were confident of a victory after putting 271 on board, thanks to Sachin Tendulkar s then career-best effort of 137. But Sri Lankan openers Sanath Jayasuriya and Romesh Kaluwitharana came out all guns blazing and surprised India, who had no reply to their all-out attacking approach. Poor Manoj Prabhakar, carted for 33 from his first 2 overs, bowed out of international cricket after bowling 2 more overs of off-breaks.

It all started Down Under

Before Jayasuriya (76-ball 79) and Kaluwitharana (16-ball 26) tormented India in the World Cup, they had shown a brief glimpse of what they could do as a pair on Sri Lanka s tour to Australia that preceded the World Cup. It was there that the experiment of pairing them at top of the order with the objective of maximising the use of initial 15 overs was first done. Though Jayasuriya did not exactly explode, Kaluwitharana got a couple of 70s at more than run-a-ball, thus convincing the islanders of the success of the formula. It finally paid off in the game against India, where they put 50 runs on board in just five overs; a phenomena which was non-existent by then.

It continued in the games to follow. Though Kaluwitharana never got going, in Ashanka Gurusinha, Aravinda de Silva, Arjuna Ranatunga, Hashan Tillakaratne and Roshan Mahanama Sri Lanka had the strongest middle-order in the world. Their next victim were hapless Kenya, against whom they were more severe, putting 83 runs inside 7 overs and laying strong foundation for an eventual 398 for 5, then the highest score in an ODI.

They entered the knockouts, sending a warning bell for England. Their juggernaut continued to roll, as Jayasuriya hammered a 44-ball 82 this time, helping his side chase down 236 inside 40 overs. The next in line were the Indians, who were stung by Sri Lanka in the group stage.

The once-bitten-twice-shy Mohammad Azharuddin decided to chase against Sri Lanka after winning the toss. It had less to do with the playing conditions and more to do with Sri Lanka s exceptional run while chasing. India wanted to avoid that and hence opted to bowl first. The decision was vindicated when Javagal Srinath reduced them 1 for 2 and further 35 for 3. But Aravinda counterattacked with an outrageous knock, and the Lankans eventually managed 251.

Despite losing an early wicket, the Indians looked completely in control of the chase till Tendulkar was at the crease. But once he was dismissed for 65, the incoming batsmen found it impossible to cope with the vicious turn and surrendered meekly. The furious crowd interrupted when India were 8 for 120 and the match was awarded to Sri Lanka by default; adding another tale to their dream, yet eventful, campaign.

The venue for the final was Lahore s Gaddafi stadium. Sri Lanka got a rousing reception from the Pakistani fans who were happy for the side that had exacted revenge on their arch-rivals for the quarter-final defeat. A lot of mind-games were played ahead of the game, and bad blood between the sides was evident. Sri Lanka were naturally upset with Australia not coming down to play the league match, and they made their hurt evident and wanted to win the final at any cost. They made several bold statements ahead of the game, thus provoking the Australians, who were not used to getting it back from the oppositions. It was the first time in ages since they were at the receiving end of a verbal barrage.

Winning the toss, Ranatunga, playing to his side s strength, invited Australia to bat first. Mark Taylor started well with a confident fifty and took his side to 110 for 1 in 20 overs, but Taylor s wicket triggered a middle-order collapse and it was only after Michael Bevan s 36 not out that they could reach to 241 for 7.

In reply, Sri Lanka had the worst possible start, with both Jayasuriya and Kaluwitharana back in the pavilion on the score of 23 (an encore of the semi-final). But once again Aravinda (who had already taken 3 wickets and 2 catches) bailed them out and took them to the historic title win with an unbeaten hundred. The phrase cometh the hour, cometh the man held true for de Silva, who was instrumental in Lanka s wins in semi-final and final, winning the Man of the Match both times. It was only apt that he along with Ranatunga finished the game for Sri Lanka.

Player of the tournament: Sanath Jayasuriya (221 runs and 7 wickets)

The tournament saw the rise of Sri Lanka in world cricket. For a team which had never made it to the knockouts of all the previous five World Cups, winning it in the sixth edition was a huge achievement. Jayasuriya revolutionised the batting during the field restrictions, and set a new template in ODIs for the other teams to follow. In an era when 60 in 15 overs was considered par, the Sri Lankan openers scored well over 100 throughout the tournament. The batch of 1996 also inspired new generations back home to take up the game in a way similar to what happened in India post 1983. It was this new-found belief and aplomb that guided the future generations and saw the team qualify for 5 finals in the next 10 ICC World tournaments (50-over and 20-over), and winning World T20 2014. 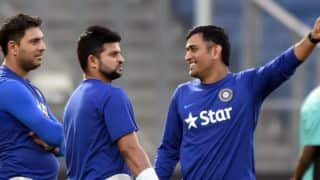