Suresh Raina gets demoted to Grade B in BCCI contracts

Suresh Raina gets demoted to Grade B in BCCI contracts

Raina is one of the veterans of the game and much more is expected from him then what he is delivering at the moment.

The Board of Control for Cricket in India (BCCI) held its AGM on Monday. Along with many path-breaking decisions, they also announced the annual player’s contract. Indian southpaw Suresh Raina’s poor form with the bat this year saw hime getting demoted to Grade B from A in the Board of Control for Cricket in India (BCCI) contracts list. In the recently concluded One-Day International (ODI) series against South Africa, Raina only managed to score 68 runs. The maverick left-handed UP batsman, who has also captained the national side, has witnessed a slide in terms of performance and this has resulted in his downfall from Grade A to B.

Raina is one of the veterans of the game and much more is expected from him then what he is delivering at the moment. Meanwhile, Indian’s one of most prolific and hard working batsman Ajinkya Rahane has been promoted to the elite group of Grade A which consists of layers like MS Dhoni, R Ashwin and Virat Kohli. It seems Rahane has reaped fruits for the hard yards he’s put in.

Interestingly, Bhuvneshwar Kumar too has been relegated to Grade B for his indigent outing with the ball.  Grade B also includes some big names of Murali Vijay, Shikhar Dhawan, Rohit Sharma, Ambati Rayudu, Ishant Sharma an Umesh Yadav, Cheteshwar Pujara and Mohammad Shami.

According to list of players in the BCCI contracts, cricketers in Group A receive an amount of Rs 1 crore for a year, whereas Group B and C will get Rs 50 and Rs 25 lakhs respectively.

Harbhajan Singh, who hadn’t earned a central contract last year, has finds himself in the Grade C this year. 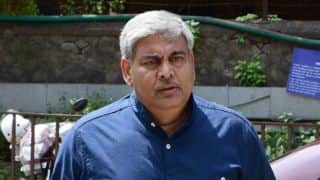