Virender Sehwag: The man who redefined batting with his unique style

Virender Sehwag: The man who redefined batting with his unique style

Former Indian cricketer Virender Sehwag was widely reckoned for his prowess with the bat at the top. He’s been the reason for many bowlers’ nightmare as he thrashed the greats with his unique technique and explosive style of play. His footwork was never the best but has garnered runs at a brisk pace in Test cricket.

Sehwag’s stance highly resembled that of his idol Sachin Tendulkar, as the former was influenced by the master blaster in his initial days. The image on the left is of the young Sehwag who was yet to make a mark in international cricket and was hungry for success. The smile says it all and portrays the innocence of ever smiling Sehwag.

The image on the right is from 2014 when Sehwag was at the HT House in New Delhi for an interview. The smile remains constant but a bit of hair have gone for a toss. Post-retirement, Sehwag manages to remain associated with the game as he is now seen commentating in Hindi. He also has a school and his cricket academy based in Haryana and is now doing a good job of passing his pristine knowledge of the game to the budding talents.

Sehwag featured in 104 Tests and amassed 8,586 runs at a staggering average of 49.34 whereas in 251 One-Day Internationals (ODIs) he garnered 8,273 runs at 35.05. Sehwag was also a sensation to watch for the Delhi Daredevils and Kings XI Punjab in the Indian Premier League (IPL). 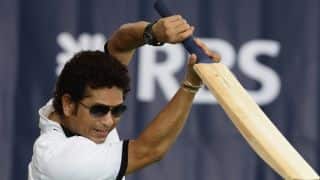