South Africa, World Cups, rains, jinx... All these are the same pieces of what has so far been a never-ending puzzle

South Africa, World Cups, rains, jinx… All these are the same pieces of what has so far been a never-ending puzzle. The rainbow nation, which enjoys an otherwise superior record against most of the cricket playing nations, somehow ends up on the wrong side of ICC’s, and at times, nature’s laws. And it is for these bizarre reasons that they have been deprived of an ICC Cricket World Cup title so far. Ever since they made their first World Cup appearance after their cricketing isolation ended, South Africa have struggled at crunch situations in World Cups; a habit that has earned them the title of chokers. But it is not just about their performance. It is not that their skills have deserted them at crucial times, but it is also their luck.

It all started in 1992, when they made a phoenix-like-rise and emerged as the favourites in their first ever World Cup. In the semi-final, their hopes were dashed by a cricketing villain. As fate would have it, one of cricket’s most controversial aspects; the rain-rule that applies to the rain-marred matches, came into picture and reduced their possibly match-winning equation of 22 from 13 balls to 22 from 1 ball while chasing. This was the first instance of rain and the farcical method colluded to kill their hopes (we will come to the second later). In 1996, they came at the receiving end of a man on mission — Brian Lara, who had made a bold statement ahead of the match that his side will not want to lose to white Africans. He backed his statement with action, as his 94-ball 111 eventually proved vital in West Indies’ 19 run win. Till then, the South Africans had virtually crushed every team that came their way.

1999 was another heartbreak, when again in the semi-final, they choked when it mattered the most. A freakish run out involving Allan Donald and Lance Klusener caused a tie and sent them home packing, as they had lost the group match against the same opposition — Australia, (interestingly from a winning position), and they were elimination on the head-to-head standing. After three jinxed outings, the South Africans hoped that the luck will finally smile on them. Also being the host for the first time, they hoped of going the distance in the 2003 edition of the World Cup. But alas, that was not meant to be!

Finding themselves in a situation, where they needed to win the final group game to qualify for the Super-Six stage, the South Africans looked good for most part of the game. It is then that the ghosts of the past; rain, the bizarre rule — returning as Duckworth–Lewis (DL) method — and the tie joined hands to haunt them again. With incessant rains pouring in, Mark Boucher and Lance Klusener, who were ill-informed about the revised target, played a role in an embarrassing tie. By the time the 12th man Nicky Boje could clear the air on the miscalculation and inform them about the exact target, Boucher had played the last ball casually for no run, thinking his six off the penultimate ball had sealed the Super-Six berth. However, as it turned out to be, they needed 1 off the last ball to win it.

The match ended in an excruciatingly painful tie. The Protean skipper Shaun Pollock kept staring at the sky hoping for the rains to stop for an hour. But the match was eventually declared as a tie with Sri Lanka advancing to the next round and South Africa crashing out. The players were crestfallen to go out of the tournament playing at home in such humiliating fashion. The picture of Sri Lankan skipper Sanath Jayasuriya putting his hand on Pollock’s shoulder to console him aptly summarised the mood of South Africans. As it turned out, the two later went on to play for the same franchise Mumbai Indians (MI) in the inaugural edition of Indian Premier League (IPL). 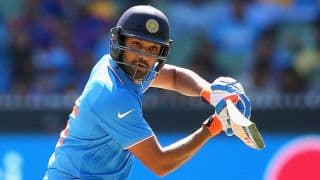