England skipper Alastair Cook hailed his team resilience after their comfortable victory against Scotland after a tough summer and praised the efforts of Ian Bell, James Anderson, Jos Buttler and the wrecker-in-chief James Tredwell.

England launched their second spell under coach Peter Moores with a 39-run Duckworth/Lewis win over Scotland in the lone one-day international at Aberdeen’s Mannofield ground. Scotland, set a rain-adjusted target of 173, lost both openers to James Anderson (two for 22) as they slumped to 18 for two against an England side they will next face again in the pool phase of the ICC World Cup 2015.

And after a revival led by man-of-the-match Michael Leask‘s blistering 42 off 16 balls, including five sixes and two fours, they were ultimately undone by off-spinner James Tredwell’s one-day best figures of four for 41. England saw captain Cook (44) and Bell (50) put on 83 for the first wicket in a total of 167 for six in an innings cut to 20 overs. 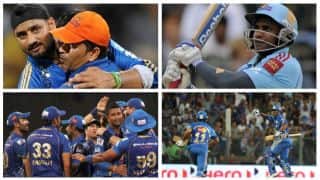