England‘s James Anderson, Stuart Broad, James Tredwell, Jos Buttler and Mark Wood pose for the cameras before the opening Test match against the West Indies in Antigua. England take on West Indies in a three-match Test series, starting April 13 at Antigua, followed by the second Test at Grenanda on April 21 and the third Test at Barbados on May 1.

Fast bowler, Anderson is “excited” but focused on helping England win the first Test in Antigua against the West Indies, in what will be his 100th appearance for England. The 32-year-old is also on the brink of surpassing Sir Ian Botham and becoming England’s leading wicket-taker of all time – he needs four wickets to achieve that outstanding feat (384). 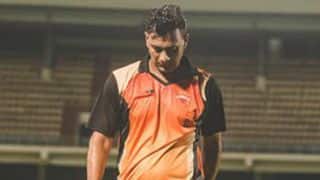 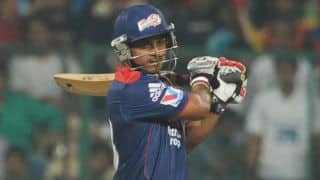 IPL 2015: Delhi Daredevils suffer another rout on the brink of victory