The first part of a video which shows England bowler Chris Jordan visiting his old school in Barbados.

Meanwhile in the third and final Test between England and the West Indies, being played at the Kensington Oval in Bridgetown, Barbados, the hosts compensated for a dismal batting effort with a sensational bowling display against England following a riveting second day’s play when 18 wickets tumbled, IANS reported.  WI vs Eng 2015, 3rd Test at Barbados: Alastair Cook’s brilliant century praised by Moeen Ali

The hosts required just 43 minutes in the morning session on Saturday to wind up the England first innings for 257. Jerome Taylor took all three wickets to fall. But the Caribbean outfit slumped to a disappointing 189 all out half-hour after tea, despite Jermaine Blackwood’s aggressive 85.

Trailing by 68, the West Indies then rocked England in their second innings, to leave the visitors tottering on 39 for five at the close. England have a lead of 107 runs heading into Sunday’s third day at the Kensington Oval. 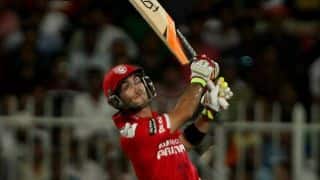