If India does go in with an all-pace attack, it will be only the third time in history that it has occurred.

Perth: Buoyed by a historic opening Test victory at Adelaide, a confident Indian side will look to extent their lead in the four-match series when the second Test against an under-pressure Australia gets underway at the new Optus Stadium in Perth hosting its first Test ever on Friday. Both teams will have to make a quick turnaround for the Perth encounter coming three days after the Adelaide contest.

India will want to fix their first-innings woes after being bowled out for 250 against a seaming ball which will also be the case in Perth, with a green top on offer and pace and bounce aplenty.

Australia, who showed great resolve to stage a fightback in the second dig falling short by 31 runs, were helped purely by the tail in the second essay with Nathan Lyon, who picked up six wickets in the second innings left unbeaten on 38.

A green top was unveiled on the eve of the second Test which may tempt Kohli to go in for an all pace attack which he did earlier in 2018. At Johannesburg, he picked a four-pacer attack with Hardik Pandya as the all-rounder.

India have also played an all-pace attack in Perth back in 2012, when MS Dhoni fielded Zaheer Khan, Umesh Yadav, Ishant Sharma and R Vinay Kumar at the WACA Ground. 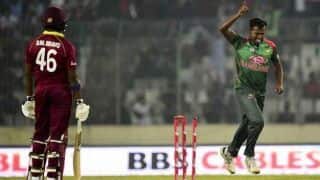