Ashton Turner produced a remarkable turnaround, powering Australia to their highest ever successful run-chase in ODI history to draw level at 2-2 against India in the ongoing five-match series on Sunday

Ashton Turner produced a remarkable turnaround, powering Australia to their highest ever successful run-chase in ODI history to draw level at 2-2 against India in the ongoing five-match series on Sunday. (4th ODI: Full Scorecard)

Chasing a record 359 to keep the series alive, Australia needed 98 to win off the final 10 overs. And then lost well-set centurion Peter Handscomb putting the tourists under more pressure. However, Turner, playing in just his second ODI, blasted an unbeaten 84 off 43 with five fours and six sixes to silence the capacity crowd gathered at the Punjab Cricket Association Stadium with Australia making 359/6 in 47.5 overs to push the series to the decider in Delhi.

Turner came at the fall of Glenn Maxwell and after quickly getting a hang of the conditions, began unfurling his shots. Kuldeep Yadav was his first victim whom he thrashed for two consecutive fours. The biggest damage, though, came in the 45th over, bowled by Bhuvneshwar Kumar, whose full toss was thwacked over long-on for a six before a four brought him his maiden ODI fifty off just 33 deliveries. He finished with a couple and a six to make it 20 from the over.

Jasprit Bumrah was then taken apart as Alex Carey (21) carved him for a four before Turner sent one over fine leg for a biggie. 16 runs from the over further calmed the nerves of the Aussie dressing room. The calmness turned into cheer when the pair again smacked Bhuvneshwar for 18 runs before completing the formalities with four wickets remaining.

The mayhem followed after Australia were given two early blows by Indian new-ball bowlers. Bhuvneshwar got rid of Aaron Finch (0) with an inswinger, the ball sneaking through the gap between bat and pad, crashing onto the stumps. Bumrah then landed a perfect yorker to clean up No. 3 Shaun Marsh (6).

12/2 in 3.3 overs chasing a target touching 360 wasn t an ideal start by any stretch. Usman Khawaja and Handscomb dug deep to ride the nervy phase without bothering about the climbing required run-rate. They took the cue from how Indian openers shaped their innings keep the scoreboard ticking with singles and doubles and release the pressure with a four whenever a loose ball was offered.

Khawaja became the sheet anchor while Handscomb took the more aggressive approach. They reached 50 in 10.3 overs, 100 came up in 18.1 overs and once the three-figure mark was breached, the they steadily shifted the gears.

Handscomb used his feet well against both Kuldeep and Yuzvendra Chahal. The pair played smartly, entering the 90s while steadying Australia .

The first real push came in the 33rd over when Handscomb hammered part-timer Kedar Jadhav for two straight sixes and a four with the over producing 19 runs. However, in the following over India hit back getting rid of Khawaja on 91. But the duo had done their job with a 192-run stand that set the platform for the big-hitters. Maxwell started with a four off the first-ball faced but Kuldeep pinned him in front for 23.

Handscomb went on to complete a maiden ODI ton before holing out to KL Rahul off Chahal. He scored 117 off 105 with eight fours and three sixes.

His dismissal put India again in control but Turner changed the course of the chase with an innings of a lifetime.

This was after Shikhar Dhawan roared back to form with an excellent century to power India to a mammoth total. The opening batsman recorded his 16th ODI century leaving behind a brief slump that saw him aggregating 69 runs across six innings. He hit a career-best 143 in Mohali the venue of his explosive Test debut when he slammed a record-breaking 187, also against Australia in 2013.

Together with Rohit Sharma, who missed out on a century of his own by five runs, Dhawan led a superb start with the pair adding 193 runs after captain Virat Kohli opted to bat.

The Australian pacers tested the duo early on but on a belter of a track there was little they could have done as the play progressed. Rohit shaped his innings in his usual style taking time, consuming deliveries early on before bringing out the big shots.

On the other hand, Dhawan looked intent on leaving behind the patchy run that had raised doubts over his spot in the playing XI. Putting those concerns firmly to bed, he played a strokeful innings, hitting 18 fours and three sixes, scoring at a strike-rate of 124.35.

Rohit holed out to midwicket fielder to walk back on 95, an innings that featured seven fours and two sixes. His dismissal brought much needed relief for the tourists who had made two changes to their squad leaving out injured Marcus Stoinis and Nathan Lyon who were replaced by Ashton Turner and Nathan Lyon respectively.

The absence of Stoinis and Turner s inability to bowl due to a shoulder issue limited Australia s options for a fifth bowler. Glenn Maxwell and captain Aaron Finch himself shared the responsibility but both proved expensive. They delivered a combined 11 wicketless overs for 83 runs.

Rohit s departure didn t change the momentum with Dhawan pushing India forward alongside the returning KL Rahul (26) who was promoted to bat at No. 3 spot ahead of Kohli. The duo added 61 runs for the second wicket, a partnership dominated by Dhawan.

Pat Cummins (5/70) was the pick of the Australian bowlers, finishing with a five-wicket haul with only Zampa escaping without getting thrashed with 1/57 from his 10 overs. For India, it was a day to forget in the field with misfield, a dropped catch and fluffed two stumping chances as well one of them of Turner when he was batting on 38. 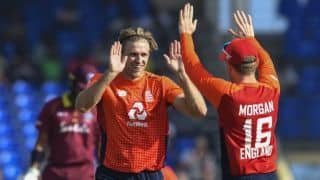