Shikhar Dhawan commended the Sri Lanka bowlers for pulling off a comeback.

Pallekele: He has hit a purple patch since his comeback into the Indian team for the Champions Trophy and opener Shikhar Dhawan attributes it to a distinct change in mindset, when put under the pump. “When I experienced failure, I had a different kind of approach. I was more on the defensive mode but now I try to go and express myself out there and play my natural game. So that has worked for me. I try to back myself as much as possible,” Dhawan said at the post-match media conference. Dhawan added a record 188 runs for the opening stand with KL Rahul, which is an Indian record. FULL CRICKET SCORECARD: Sri Lanka vs India, 3rd Test

“The wicket is bit on the slower side and doesn’t have much of bounce on it. Rahul and I, we played very nicely. We got out playing shots. It was not as if we were getting out because of the track or anything,” Dhawan said. Asked about his cracking pull-shot that was impressively pouched by rival skipper Dinesh Chandimal, Dhawan smiled and said: “I said jokingly that if you bat like a king, you should also get out like a king, you should not be dismissed like a soldier. If you have made runs aggressively, then you will get out that way too. That’s how it is.

“I know I am an aggressive batsman so I would rather get out that way (pull to square leg) than getting out in the slips and being defensive because that is not my natural game,” he added.

Dhawan said that once they had reached 75 plus score, they were not talking to each other.

“When we were 75-80, we didn’t talk to each other but each batsman talks to himself. He can see that 100 is not far away. Each batsman has his own plan on how to get there. Some like to do it in singles, with less risk. I know if I can hit a bowler, I go on that basis.

The senior opener is not unduly worried that India lost six wickets in the two final sessions.

“It happens,” said Dhawan on Saturday, referring to the collapse.

“It’s not that it has happened for the first time. We got a good start and still feel at the end of the day, 329 is a good score. Those are batting now are capable of scoring big runs and it’s a wicket where it is not spinning but it doesn’t have bounce.

“So it’s not easy to score runs out there and even outfield is not that quick. When Sri Lanka come out to bat, we are going to make sure that we squeeze them hard and not give away easy runs.”

“The Chinaman bowler (Lakshan Sadakan) is very nice. He was turning the ball and one odd ball was turning a lot. It s hard to pick his googly also. Especially once we got out, the way he came back and bowled, it was good for them. Their left-arm orthodox spinner (Malinda Pushpakumara) is also good and he took wickets today. He has been bowling consistently on the right spot for them,” Dhawan observed.

Dhawan commended the bowlers for doing a good job.

“They came back well. Their body language was good and they held good catches. Whatever credit they must get, they deserve. They bowled in consistent areas,” he signed off. 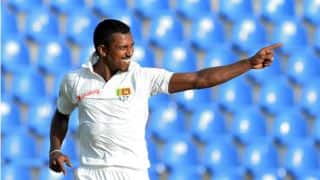 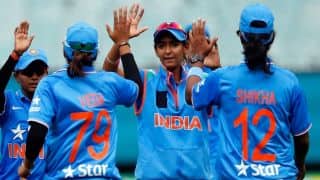