IPL 2012: All team analysis and predictions

IPL 2012: All team analysis and predictions
By CricketCountry Staff

A video of analysis by cricket experts of the cash-rich Indian premier League which kicks off in India on Wednesday with defending champions taking on Mumbai India in Chennai.

The IPL 5 will have nine teams competing for the ultimate glory. A total of 72 league matches will be played at 12 venues over 54 days. The nine IPL franchise will play 16 matches each (eight away and eight home) to claim the top spot in points table.

Four play-off matches, including the final, will be played taking the total to 76 matches.

In the play-offs, the top two teams in the points table from the league will face each other in the Qualifier 1 play-off match and the winner will qualify for the final.

Catch the points table of the IPL 2012 here 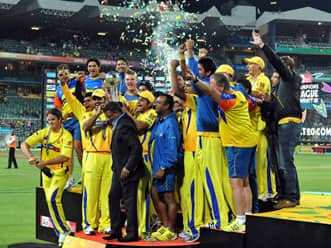