Harsha Bhogle made his dubsmash debut and that too ‘in Ravi Shastri style’.

Harsha Bhogle, following the latest trend in cricketing community of making Dubsmash videos, made his debut and that too ‘in Ravi Shastri style’. The famous Indian commentator recorded a Dubsmash video for a campaign and it has already gone viral over the web. Harsha chose none other than Ravi Shastri and enacted a popular piece. It is the charismatic paragraph and one of the most emotional moments for any Indian Cricket Fans as the lines describe how India lifted the 2011 ICC Cricket World Cup with a six from captain Mahendra Singh Dhoni’s bat. The Classic went like:

“Dhoni finishes off in style! A magnificent strike into the crowd; India lift the World Cup after 28 years.”

Harsha also mentioned that the moments were obviously the ones to cherish for the lifetime. But those were even glorified the way Ravi Shastri pronounced India’s dramatic victory. He also added that cricket commentary in true sense must comprise of all these qualities.

Dubsmash, ever since its introduction, has been used vividly by celebrities across professions and cricket is no exception.  Popular cricketers like Virat Kohli, MS Dhoni, Yuvraj Singh, Glenn Maxwell, Shoaib Malik, David Miller, Ravichandran Ashwin and even the Indian Premier League( IPL) franchise Kings XI Punjab team members have also shared their funny videos made with the software making it a prominent trend. Now with Harsha Bhogle, the Indian commentators’ community also enters the league. Here is the video of Harsha’s animated interpretation of the Ravi Shastri classic: 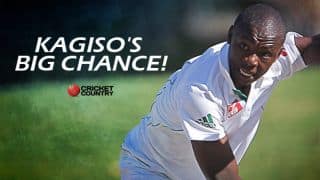