On being quizzed his role in the team, he said he enjoyed bowling in the death overs more than others. After being whitewashed 5-0 in the Ashes, the Aussies romped home in style by six wickets against England to lead the five match one day series 1-0.

A patient 79 from Gary Ballance and whirlwind 50 from Eoin Morgan helped England to 269-7 in the first One-Day International against Australia on Sunday.

Ballance, who came to the crease when England were struggling at 22-2, held the innings together before accelerating towards the end when quick runs were needed.

He shared in an 83-run partnership with Morgan, who blasted his 20th ODI half-century off just 47 balls with five fours and a towering six.

England had earlier won the toss, with skipper Alastair Cook having no hesitation in batting first on a flat MCG wicket. 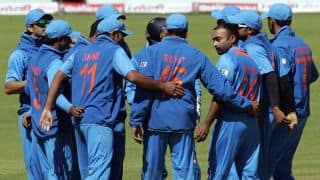