Robin Peterson hailed Faf du Plessis’s brilliant fielding in a press conference. Peterson went on to say it was du Plessis’s wicket rather than his. Shikhar Dhawan had slashed the ball hard and the South Afircan batsman had clung on it from an impossible angle.

South Africa on Monday strengthened their position as the No 1 ranked side on the International Cricket Councul (ICC) Test Team Rankings table courtesy their 10-wicket victory over India in the second and final Test in Durban.

Meanwhile, Australia have an opportunity to finish third on the rankings table.

Australia had entered the Ashes series in fifth position on 101 ratings points, but after taking a 4-0 lead against England, they are guaranteed fourth position on the table. And Michael Clarke‘s side will gain one more place if they remain unbeaten in the Sydney Test, which starts on January 3.

The only way England can defend their third position on the table is by winning the Sydney Test. In this scenario, England will end on 109 ratings points while Australia will finish on 108 ratings points. 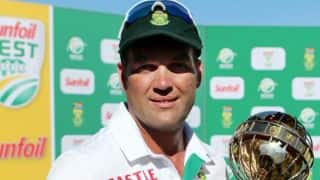 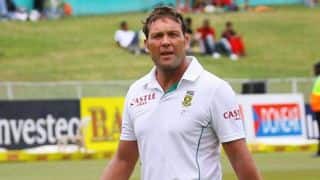