Australia’s Steven Smith said that the Centurion wicket has shaped out really well allowing Australia to put up the runs against South Africa.

Smith hoped that the wicket would stay true to its nature and also hoped that the cracks come out into play later on as the day progresses, which may aid the Australian spin bowlers.

Smith also lauded Shaun Marsh for helping Australia dig out of a hole against the Proteas as both batsmen struck fine centuries and put Australia in the driving seat. 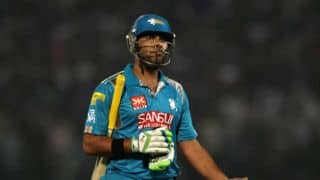