Billy Bowden has made a name for himself as much for his funny on-field antics as his accuracy with tough decisions. The video here is a compilation of three of his many strange instances. The third part of the video, shows Suresh Raina imitating Bowden, raise his finger to indicate a wicket in his signature crooked-finger style.

The incident came about during the first One-Day International (ODI) of the India-Pakistan three-match ODI series on Dec 30, 2012. Pakistan won the match by four wickets.

Raina was still in mood for some jokes however. The match was played at Chennai. The video also includes two other weird situations involving Bowden. In the first, Mitchell Johnson appeals for an lbw but Bowden doesn’t respond and the batsmen cross-over for a leg-bye.

After the batsman reached the non-strikers end, to his horror Bowden unleashed the crooked finger to send him back to the pavillion. In the second, Bowden in attempt to evade a sweep shot coming his way at square leg he looses balance and topples over. 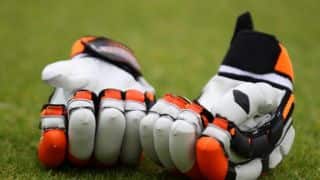