Usain Bolt participates in a cricket match against Yuvraj Singh

Usain Bolt faced Yuvraj Singh in an exhibition cricket match at the Chinnaswamy stadium in Bengaluru on Tuesday. Bolt’s team managed to defeat Yuvraj’s team in this match.

Earlier the Jamaican sprint legend Bolt wowed his Indian fans in his trademark style in a brief exhibition cricket contest against Yuvraj Singh in his maiden trip to the country.

Bolt showcased his cricketing talent in front of an enthusiastic 6000-odd crowd who turned up at the Chinnaswamy Stadium to have a glimpse of the ‘fastest man on earth’ as his team beat Yuvraj-led side in seven-a-side cricket match. Team Bolt clinched a thrilling last-ball victory over Team Yuvraj in the match which had four overs for each team.

The Jamaican, the first man to win six Olympic sprint gold medals, blasted his way to a 19-ball 45, studded with five sixes including three off Yuvraj, as his team chased down the 59-run target in the last ball off the match. Though the crowd was small by the standard of a Bolt event, the spectators showed their enthusiasm as they cheered at every shot the showman from Jamaica made, though the contest was meant for entertainment and not for any cricketing ability.

Yuvraj though had his ‘sweet revenge’ as he ‘defeated’ Bolt in the 100 meter sprint on the track, which culminated the spectacular event which was played in an electrifying atmosphere. Bolt, who holds both the world records of 100m and 200m, ‘allowed’ Yuvraj to win the race. As he went past the finishing line, Yuvraj celebrated the ‘victory’ in mobot-style which Bolt had done during 2012 London Olympics by imitating celebrated British long distance runner Mo Farah.

Team Bolt comprised his best friend Nugent Walker Junior and Indian spinner Harbhajan Singh among others while India’s 2011 Cricket World Cup winning hero Yuvraj had pacer Zaheer Khan among others in his team for the face-off titled ‘Bolt and Yuvi ? Battle of the Legends’. Team Bolt required 10 runs off the last two balls and the very first ball Bolt hammered part-time off-spinner Aditya Tare for a six straight over his head.

With four runs required off the last ball, Bolt tried a massive heave but missed. Just when Yuvraj and his team started to celebrate, Ajay Jadeja, who hosted the match, played his part to the script of the entertainment value of the contest. He called a no-ball much to the delight of Bolt, who did not lose the opportunity to whack the free-hit out of the park for a six, helping his side pull off a win in the contest organised by sportswear giant PUMA. Both Bolt and Yuvraj are PUMA ambassadors.

Batting first, Team Yuvraj made 58 in the stipulated four overs with Yuvraj and Tare scoring 24 off 14 balls and 30 off 11 balls respectively. Yuvraj blasted four boundaries and one six and Tare five fours and a six. Though Yuvraj was stumped early on, he continued to bat, courtesy the format where captains of the sides were allowed to play throughout their respective overs.

Earlier, in the bowl-out contest, both Team Yuvraj and Team Bolt, drew each other, gaining three points each. But Bolt prevailed over Yuvraj in big six contest, clearing a good 70 meters mark, much to the delight of the Jamaican who could not believe to have beaten one of the biggest six hitters in cricket. 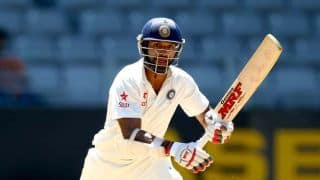