Sanath Jayasuriya never stops to amuse cricket fans. He was one of those batsmen who always had a rush of adrenaline going through their veins. The left-hander had a liking for the cricket ground at Sharjah. It was on this ground that he had scored 189 as well and completely decimated the Indian bowling attack. In this particular video we can see him destroying Chris Harris with his explosive batsmanship in an ODI at Sharjah in 2000. He hit Harris for four sixes, one four and a double. All the shots were timed well. VIDEO: Sanath Jayasuriya’s 114 against Australia, 5th ODI at Sydney, 2006

The order of his scoring shots was 6,6,6,6,4 and 2. Harris was not a great bowler but certainly not the one who would give 30 runs in six balls. But you can’t do much if you are up against in-form Jayasuriya who is also called the ‘Matara Mauler’. The first six was accomplished by a pull shot and the second with a straight bat down the ground. The next two sixes and the follow-up four were again executed through a pull shot. He scored a couple on the last ball by steering it towards the on side. Mistake on Harris’s part was that he pitched five of his deliveries at Jayasuriya’s strong area. He could have tried to change his line a little. 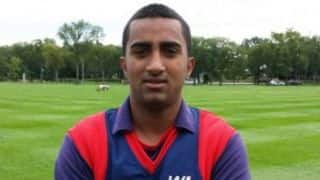