This was in the third Border-Gavaskar Trophy Test in Melbourne in 2003-04.

Ajit Agarkar injured Steve Waugh on the arm in the third Test of the Border-Gavaskar trophy in Australia in 2003-04. In what was Waugh’s final Test series before retirement, Australia just about managed to scrape off India’s onslaught for a series win, by saving the final Test in Sydney, helped by Waugh’s own 80. After a drawn first Test in Brisbane, India conjured an epic victory in Adelaide, and after a scintillating start with the bat in the third Test in Melbourne, lost the plot a bit. Virender Sehwag scored an attacking 195 on the first day, did not get significant support from the other end, and India folded for 366. Australia, via a double-ton from Ricky Ponting, scored 558. India, in their second innings, were bowled out for 286, with a lead of only 94, which was eclipsed with ease. READ: World Cup 1987: The Steve Waugh turnaround

This incident occurred during Waugh’s innings of 19 off 69 balls. After Damien Martyn nicked Agarkar behind to get out, Waugh arrived and received a sharp delivery from the bowler that hit his elbow. The elbow started to become swollen, and it was soon evident the Australian captain was in trouble. He went off. READ: Steve Waugh’s farewell Test: A fitting goodbye

Australia were then cruising at 373 for 4, with a lead of seven runs. Ponting went on to score 257, his career best, before departing in the 151st over. The double ton he scored in the earlier game, in Adelaide, would be his second best. India held the trophy, courtesy the 2-1 win at home in 2001, with a dawn series. 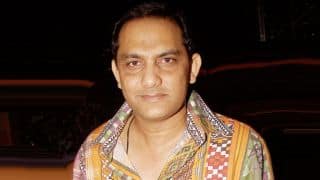 Mohammad Azharuddin to be honoured by Derbyshire