Manipur’s 18-year-old pacer Rajkumar Rex Singh achieved a rare feat of claiming all 10 wickets to fall in an innings when he singlehandedly shot down Arunachal Pradesh for 36 in a Cooch Behar Trophy Under-19 fixture on Tuesday.

During his spell, the left-arm pacer thrice came on the verge of claiming a hat-trick with five of his victims being bowled, two lbws and three being caught.

ALSO READ: With a new team in Manipur, Yashpal continues to be the crisis man

Rex s second innings exploits followed a five-wicket haul in the first dig after Manipur opted to field at the Rural Development Trust Stadium in Ananthapur. Arunachal were bowled out for 138 with Rex taking 5/33.

Boosted by a slim but important lead of 16 runs, Arunachal would have hoped to put up a better display with the bat in their second essay. They ran into Rex who was in some mood.

The start was cautious as the pair of Vishek Kumar and Md Bilal added 17 before Rex struck with three wickets in the space of four deliveries in the seventh over.

A brief break followed as Arunachal added 12 runs to their total to reach 30/3 before Rex struck again to leave them at 30/4 in 12.5 overs.

And six overs later, Rex had done the unthinkable to finish 10/11 and leaving Manipur with a slim target of 53 runs. Boosted by a superlative effort from their teammate, the opening pair of Shubham Chauhan and Johnson overhauled the target eight overs, finishing at 55/0 in a crushing victory.

Rex has already been part of Manipur s List A and first-class teams. He made his List A debut in Puducherry during the Vijay Hazare Trophy and recorded a five-wicket haul against Mizoram in September.

Overall, he has played six List A matches so far, picking up seven wickets while in two first-class matches, he has three wickets. 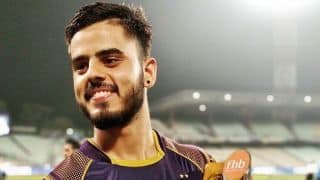