India finished Day Three of the fourth Test against South Africa at 190 for 4.

India finished Day Three of the fourth Test against South Africa at 190 for 4. Virat Kohli and Ajinkya Rahane have put on an unbeaten stand of 133 runs runs for the fifth wicket, which is the only 100-run stand in the entire series. India therefore lead South Africa by 403 runs. Rahane and Kohli have ensured that India do not lose a single wicket in the entire session, which has been a rarity in this series. Kohli scored his 12th Test fifty and he will look to convert this into a into a hundred. Rahane too has looked good in this partnership on his way to an unbeaten half-century. Rahane scored a brilliant 127 in the first innings to help India put on a formidable total. He is now the leading run-getter in the series.  FULL CRICKET SCORECARD: India vs South Africa 2015, 4th Test at Delhi

Shikhar Dhawan and Cheteshwar Pujara saw the team through to lunch with no further damage. But Morkel struck once again soon after as he got rid of Dhawan for 21. Pujara was the next to go as he was cleaned u by Imran Tahir, who picked up his first wicket of the innings. Rahane and Kohli have ever since frustrated the bowlers and have not thrown their wickets away. India have a huge lead at the moment and will look to declare sometime before or after lunch on Day Four. Virat Kohli, Ajinkya Rahane put India in commanding position vs South Africa in 4th Test at Delhi

India scored 334 in their first innings after an excellent century from Rahane and a 56 off the bat of Ravichandran Ashwin. Kyle Abbott bowled extremely well and picked up five wickets. Off-spinner Dane Piedt chipped in with four wickets for the Proteas. South Africa in reply managed just 121. Ravindra Jadeja picked up his second five-wicket haul of the series. India lead the series 2-0 after wins at Mohali and Nagpur. 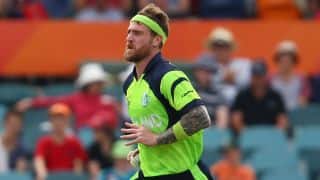