Australian debutant Peter Handscomb smashed a healthy half-century in his debut Test game and innings, on Day 2 of the third and final day-night Test vs South Africa.

Australian debutant smashed a healthy half-century in his debut Test game and innings, on Day 2 of the third and final day-night Test vs visitors South Africa at the Adelaide Oval on Friday. Following his half-century, he expressed his satisfaction for playing the steady knock, and also expressed his desire and is also determined to cement his spot in the middle-order line-up. He also said that his mother was in tears following his knock, as he looks to go out in the middle and do what he does best. He will bat good, and make sure he stays in the side for long enough. FULL CRICKET SCORECARD: Australia vs South Africa, 3rd Test at Adelaide

Iron-willed Usman Khawaja batted out the entire day to tilt the third day-night Test towards Australia with a masterful century against South Africa on Friday. At the close on the second day in Adelaide, the Australians were 307 for six in reply to the Proteas’ 259 for nine declared, with Khawaja unbeaten on 138 off 285 balls and Mitchell Starc not out 16. The home side lead by 48 runs. It was Khawaja’s fifth Test century and arguably his best as Australia seek to prevent the Proteas from an unprecedented series clean sweep after huge defeats in the opening two Tests, reports AFP.

Khawaja, who has performed best out of the Australian batsmen in a troubled series, led the way with his wristy shot-making to put the home side in front in the pink-ball Test. It was the first century by an Australian in the series and the stylish left-hander has now scored 307 runs in the three Tests, added AFP. 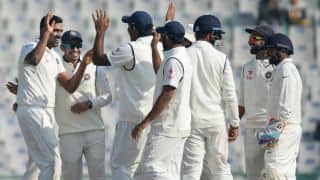