VIDEO: Ricky Ponting talks about his second double-century against India in 2003-04

VIDEO: Ricky Ponting talks about his second double-century against India in 2003-04

The middle-order batsman had scored two back-to-back double tons in that series.

Ricky Ponting was in hot form against India in 2003-04. He was the highest run-getter in the series, with 706 runs in eight innings, at an average of more than 100. India had dominated the hosts in the series, besides an aberration in Melbourne, that had Virender Sehwag smashing 195 on the first day before getting caught in the deep, and Ponting backing up his double-century in a losing cause in the previous game in Adelaide with another one, this time a match-winning one. India had the upper hand in the Sydney Test, captain Steve Waugh’s final Test, but couldn’t bowl Australia out in time to force victory, thereby retaining the Border-Gavaskar trophy with a 1-1 draw. VIDEO: Ricky Ponting plays a mammoth innings of 257 against India at Melbourne in 2003-04

Ponting talks about the second of the two double-centuries, in Melbourne. He mentions that a knock in the middle that is enjoyed by the batsman will have him not able to recollect much of what was happening, as the concentration disallows him to be distracted from the thing at hand. Although the Border-Gavaskar trophy was in India’s favour at the end of the series, his team, captained by Adam Gilchrist due to an injury trouble to Ponting, won the Test series in their subsequent tour of India, and won the trophy back. It was in Australia till 2008, when India beat them again, in India. READ: The Ashes 2015: Ricky Ponting to ring Lord’s bell on Day 1 of the 2nd Test

Ponting had two half-centuries in the 2003-04 series as well, but his team were mediocre in those games, something that hadn’t gone down well with him, as he maintained in his autobiography, ‘At the Close of Play’. He had always wanted and expected the Australian team to play competitively, as they mostly have, in that era. 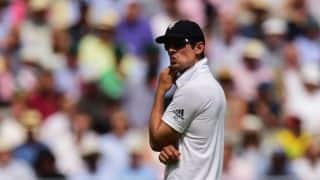