Exclusive point of view footage of India legend Sachin Tendulkar walking out to bat at Lord's.

Exclusive point of view footage of India legend Sachin Tendulkar walking out to bat at Lord’s during the MCC v Rest of the World game on Saturday 5 July. Tendulkar’s celestial gifts redefined cricketing statistics: the only batsman to score 100 international centuries, the only player to play 200 Tests, the first to score a double-hundred in ODIs, the only batsman to score 30,000 international runs, and the owner of the highest number of runs and hundreds in both Tests and ODIs. Tendulkar was more than useful as a bowler as his 201 international wickets (46 in Tests, 154 in ODIs, 1 in T20Is) bears testimony. This includes two five-for in ODIs. Sachin Tendulkar saves Munni in Bajrangi Bhaijaan spoof video 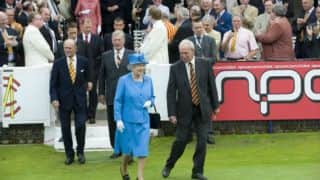