Sunil Gavaskar faces some of the best fast bowlers.

West Indies fast bowlers of 1970s and 80s formed a brutal killing machine. The nation had the likes of Joel Garner, Andy Roberts, Colin Croft and Michael Holding. Later, arguably the greatest pace bowler Malcolm Marshall joined the brigade followed by Courtney Walsh and Curtly Ambrose. Facing West Indies pace bowlers in the 70s was nightmare for any batsman. Since, many a times all the four pacers bowled together there was no respite for the batters. If we take all this into account, Sunil Gavaskar‘s average of 65.45 against West Indies is simply awesome. He played 27 matches against them and scored 2,749 runs with the help of 12 hundreds and seven 50s. Sunil Gavaskar reveals why Sachin Tendulkar changed his autograph: Video

In this video, Gavaskar’s ability in handling the greatest fast bowlers— their pace, swing and bounce is at show. Gavaskar was arguably the greatest technically correct opening batsman of all time. It was very difficult to get him out. Many experts called his technique ‘text-book’; very few after him have been able to mirror the solid defence of this Indian batsman. In this video, he can be seen playing with the emotions of the Caribbean bowlers. He plays his shots all round the ground; he cuts, pulls and hooks the ball. He steers the ball through mid-wicket and short-fine-leg. He plays the best pace bowlers with ease in this innings, but got out off a spinner after scoring his century. He faced the quicks, many of whom were bowling at 140 kph, without a helmet. 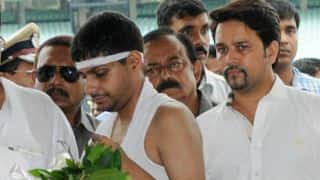