Jones' quickfire cameo made whatever little fans had assembled at the Gaddafi Stadium in Lahore to watch the match nostalgic. He reminded them what a destructive force he once was.

Former Australian cricketer Dean Jones re-wrote the rules of One-Day International (ODI) cricket in his playing days. An attacking batsman, who did not mind coming down the track to fast bowlers, Jones was equally good in Test cricket too. He is the same player who scored 210 in hot and humid Chennai during the famous tied Test in 1986, only to end up in the hospital. The same cricketer, who was much-loved in his playing days, garners affection as an astute cricket commentator these days.

Recently in India for a commentary assignment with the Tamil Nadu Premier League (TNPL), Jones won may a heart by wearing the traditional Tamil attire while presenting during the matches. When the invitation from neighbours Pakistan to celebrate Islamabad United’s title win in the inaugural edition of Pakistan Super League (PSL) came, he happily accepted and went to Lahore to be a part of the festivities. Mind you, Jones was invited in the capacity of team’s ‘Ustaad’ or coach, who led them to the title win. In Lahore, he took part in celebrations along with team’s skipper Misbah-Ul-Haq and mentor Wasim Akram.

As a part of the celebrations, a friendly Twenty20 (T20) match was played by the players and support staff of the Islamabad franchise, who formed two teams for the match. Jones, who walked out to bat at the fall of three wickets for one of the sides, turned back the clock by two and a half decades. Coming in to bat in the 11th over, 55-year-old Jones straightaway got to the attacking ways and quite effortlessly hit the bowlers from the word go. Without wasting time, he scored 2 fours and equal number of hits beyond the fence to seal the game for his side. Particularly, the sixes that he hit off the left-arm spinner by coming down the track and depositing the ball into the stands over the bowler’s head were majestic.

His quickfire cameo made whatever little fans had assembled at the Gaddafi Stadium in Lahore to watch the match nostalgic. He reminded them what a destructive force he once was. Jones, a jovial personality, was also extremely friendly and playful with his wards on the field during the match. The bond that he shares with his team was easily visible during the match. Afterall, it is not for nothing that the Islamabad team became the PSL winner.

Meanwhile, watch the video where Jones gives a glimpse of the past, here: 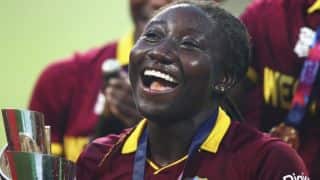