Younis Khan once said, Whenever I am out of form, I get to play against India and I regain my form.

Pretty cocky, you may think, but like Younis, many players have an opposing team they almost always manage to score runs against. VVS Laxman had the knack of tormenting the Australians with his insatiable appetite for runs. Azhar Mahmood had a strange knack of getting big scores against South Africa but failing against everyone else. Graeme Smith raised his game to another level when he faced England. More recently, Steven Smith has started scoring runs for fun against India.

On the women s circuit too there are many such players. In fact, earlier this week, in a Player of the Match performance, Shikha Pandey picked up at least 3 wickets for the third time against South Africa.

Inspired by Pandey s showings, CricketCountry takes a look at 10 such women cricketers who lift their performance levels when they come across their favorite opposition in ODIs.

Mohammed, the West Indies off-spinner, currently sits at No. 5 on the ODI bowling charts with 136 wickets, 25% of which have come against Pakistan. Mohammed s 34 wickets have come at an astounding average of only 7.97 less than half her career average. As if that was not good enough, she has taken 4 of her 5 ODI five-wicket hauls against Pakistan, including her career-best figures of 7 for 14.

Atapattu is known on the international circuit for her aggressive style of play. She is the highest run-scorer in ODIs for Sri Lanka and the only batter from the country to score an ODI century as well. The second of Atapattu s centuries came in 2014 against South Africa, an opposition against whom she has done consistently well. In 12 ODIs against South Africa, she has only 3 scores below 25. Almost one-third of her runs have come against South Africa, at an average of 42 almost 15 runs above her career average.

When Perry hobbled in to bowl in the 2013 Women s World Cup final, her ankle heavily strapped, and didn t deliver the ball twice, the look of anguish on Australian captain Jodie Fields face said it all. But Perry overcame the pain and went on to demolish the West Indies top-order in a devastating spell of fast bowling. It was the first time she would haunt them, but it wouldn t be the last. A little over a year later, in the opening round of the ICC Women s Championship, Perry picked up 7 wickets and scored 4 consecutive half-centuries against the island nation.

Through her 15-year journey to become the highest ODI wicket taker, Goswami has tormented many teams, although none more than England. Since her ODI debut (against England) in 2002, till her most recent encounter against them in 2014, Goswami has picked up 57 wickets against the old enemy: that s 31% of her career tally so far.

Over the last two years, Lanning has been the most prolific run-scorer in the women s circuit. She collects her runs at a rapid pace against most teams, but against New Zealand she is even faster scoring at a strike rate of 107.96. The Australian captain has scored 5 of her 10 ODI centuries against the Kiwis, and has only twice been dismissed for a single digit score.

Raj s average in ODIs is an impressive 51.50. Hard to beat, you would think, but against Sri Lanka the Indian ODI captain averages more than thrice her career average a staggering 174.60. In 18 innings against Sri Lanka, Raj has been dismissed only 5 times and only once for a single-digit score.

One of the most gifted batters of her generation, Taylor s career average of 39.76 doesn t do justice to her talent. Against New Zealand, however, the wicketkeeper s performances show a great deal of improvement. For one, her average shoots up by almost 8 runs, and in 30 matches against them, Taylor has amassed close to 34% of her career runs. In her last series against them in 2015, Taylor scored 245 runs in 5 matches including 2 half-centuries.

When on song, Ismail can easily tear through any batting line-up. South Africa s pocket rocket has taken a special liking to Sri Lanka. Although she has not managed a 5-wicket haul against them, Ismail has been a model of consistency, picking up at least one wicket in 12 out of 13 matches against them.

In only her second ODI, and first against South Africa, Shikha Pandey picked up 3 wickets and scored a fifty to become the first Indian woman to achieve that feat in an ODI. Since then, the pace bowling all-rounder has always performed admirably against South Africa. More than half her ODI career runs and most of her best spells have come against them. Whether it is scoring crucial runs or breaking important partnerships, against South Africa, Pandey is the one India must call on.

West Indies victory over New Zealand in the 2016 ICC World T20 semi-final will be remembered more for Brittany Cooper s blitz and Deandra Dottin s run out of Sophie Devine than Taylor s 25 runs and 3 wickets. It was Taylor s contribution, however, that made the real difference between the teams. Her canny off-spin has tormented New Zealand on more than a few occasions in ODIs too her 20 wickets coming at an average of 14. With bat, too, Taylor has been a thorn in their flesh, averaging 50, and being dismissed only twice for less than 20. 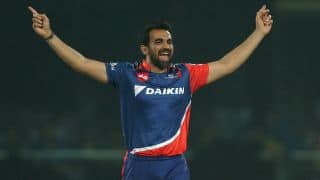