The year gave us many thrilling matches in the shortest format of cricket, listing the top 10 Twenty20 Internationals of 2015.

As 2015 comes to an end, we look at few of the most thrilling, exhilarating and pulsating Twenty20 (T20) matches played. These not only include bilateral matches but also ICC World T20 Qualifiers, which had more nail-biting finishes than the actual internationals. Vishal Mehra lists downs ten such suspenseful matches played in the year.

1. South Africa versus West Indies, 2nd T20I at Johannesburg: After a close first T20I between West Indies and South Africa, it was expected that the second match will also go down the wire. And it turned out to be an even more close than to everyone’s liking. After a smashing display of batting by Faf Du Plessis, who made 119 off just 99 balls, South Africa made 231 in the allotted 20 overs.

West Indies got off to a brilliant start with Chris Gayle and Marlon Samuels making 152-run partnership, before it went all bad for West Indies . From 171/2 to 209/6 it was a disastrous middle-order performance. David Wiese showed his skills with the old ball, dismissing the dangerous trio of Gayle, Samuels and Kieron Pollard. Going into the penultimate over, West Indies  required 21 from 12 balls with captain Darren Sammy still at the crease. Kyle Abbott went for 18 runs, surpassing the world record for the most runs ever scored in second innings.

In the final over of the game, West Indies required 3 runs off 6 balls as Sammy hit Marchant de Lange for a huge six over square-leg, and finished an absolute peach of a game in style.

2. Pakistan versus Zimbabwe, 2nd T20I at Lahore: After winning the first T20I in the final over, Pakistan repeated the same in this game well. The  only difference being this match was the fact that both Pakistan and Zimbabwe had equal changes of winning.  Zimbabwe, after batting first, made 175 with Sean Williams making 58 off as many balls. Vusi Sibanda supported well, but fell short of a deserving fifty. Pakistan got off a good start as Mukhtar Ahmed fired 62 off 63 balls before getting out, with Pakistan four down at 117. Chris Mpofu bowled wonderfully , being the most economical bowler giving away only 25 runs, picking the important wicket of dangerous Umar Akmal. At that stage Pakistan needed 23 runs from 2 overs. Pakistan needed 12 runs in the final over with Imad Wasim and Bilawal Bhatti batting on four and one respectively, Brian Vitori went for a first-ball six with Bhatti hitting one out of the ground. Three balls to go, Bhatti hit another for a four through covers. Pakistan sealed the the series with this close finish.

3. England versus Pakistan, 2nd T20I at Dubai: England survived a late Shahid Afridi onslaught with Pakistan needing as many as 47 runs in three overs. Afridi hit Chris Jordan for three huge sixes to make a lovely comeback. England made 172 runs in 20 overs with James Vince scoring 38 off 38 balls. He was supported by Jos Buttler, who made quickfire 33. Pakistan, in reply, started off well with the steady starts from Ahmed Shahzad, Rafatullah, Mohammad Hafeez and Shoaib Malik reaching mid 20s. Pakistan collapsed to 120 for six before Afridi’s 10-ball 24 brought his team nearer to victory with a thundering strike rate of 300.

4. Hong Kong versus Oman, 1st T20I at Abu Dhabi Hong Kong managed only 106 runs as Oman bowlers Bilal Khan and Mehran Khan squeezed overs without giving too many runs. Waqas Khan was the highest scoring batsman with 19 runs; with Mark Chapman was their most dependable getting out making 18 runs. Oman suffered similar treatement as they were tottering at 43 for 4. It was their captain Sultan Ahmed who teamed up with Zeeshan Siddiqui to produce a 64-run stand, as Oman won a memorable match with just 9 balls to spare. It was one of the major upsets in World T20 Qualifiers.

5. Zimbabwe versus Afghanistan, 2nd T20I at Bulawayo:  Opener Usman Ghani and all-rounder Gulbadin Naib led Afghanistan as they chased down Zimbabwe’s 190 with one ball to spare. Zimbabwe made 190 in 20 overs with Sean Williams (54) and Richmond Mutumbami (43) throwing their bats at everything that Afghanistan bowlers had to offer. Ghani’s 65 helped Afghanistan reach 95 in 10 overs before they were 95 for two, as Chibhabha struck. Afghanistan kept on losing wickets at regular intervals with run rate still under control. It was up to Naib who batted all through the innings with Afghanistan needing 9 runs from last over. It was only poetic justice that Naib scored the winning runs, giving Afghanistan another series victory.

6. ICC World T20 Qualifiers, Group A: Ireland versus Jersey at Dublin: Paul Stirling and John Mooney’s brilliant performances made his match even more special as Ireland also sealed their spot in upcoming ICC World T20 2016. Jersey, batting first, made 122 in 19.5 overs as John Mooney’s hat-trick shell shocked any chances of their opponent getting past 140. Jersey were well placed, having lost one wicket at 88. Jersey’s bowling looked lacklustre as Ireland chased down 123 without any hassle. Stirling batted well for his 55 in 43 balls as Jersey bowled with good pace, which was tough to get off. Andy Balbirinie with 32 runs, supported Stirling and guided Ireland to a memorable win.

7: Bangladesh versus Zimbabwe, 2nd T20I at Dhaka: Zimbabwe chased down Bangladesh’s 135 in what was a thrilling finish to the second T20I in Mirpur. They won by three wickets, with one ball to spare hitting the penultimate ball of the innings for six. This victory was also the first on the tour for Zimbabwe, who were humiliated on almost every occasion. Bangladesh somehow managed to get to 135 with Anamul Haque making 47 before running out trying to sneak in a single. Zimbabwe made a horrendous start, as they were left tottering at 309 for 5, needing another 100 runs to win.  Luke Jongwe and Malcolm Waller’s 55-run partnership gave Zimbabwe some chance  of winning the match. Zimbabwe needed 18 runs from 6 balls lost the momentum with Waller getting out on the very first ball of the over. Neville Madziva’s late sixes and fours in the final over made it a historic comeback victory for Zimbabwe.

8.  England versus Australia, only T20I at Cardiff: Ben Stokes’s outstanding catch and a nerveless final over played a major part in an England’s victory over Australia in the one-off T20 match. After 13 overs, Australia were cruising with Glenn Maxwell and Steven Smith adding 112 for the third wicket. Stokes’s catch of Maxwell, trying to heave Moeen Ali, changed the momentum. Stokes delivered  a fine 20th over with Australia managing just six of the 12 runs they required for victory. England scored 182 runs with Ali and captain Eoin Morgan making 74. Smith’s 90 went in vain as Australia just missed out.

9. India versus South Africa, 1st T20I at Dharamsala: Rohit Sharma’s only T20 century for India came at a losing cause as JP Duminy 68 not out proved to be the match-winning knock for the touring South Africans. Duminy shared a 105-run 4th-wicket partnership with Farhaan Behardien to ensure South Africa chase down 200 for only the second time in T20Is, after AB de Villiers and Hashim Amla set them up with a 77-run opening stand. India made 199 after 106 by Rohit with Virat Kohli making 43. South Africa needed 107 runs off 61 balls when Duminy arrived at the crease and his task was immediately made more difficult when debutant Sreenath Aravind got his maiden wicket in form of Faf du Plessis.

10. Sri Lanka versus Pakistan, 2nd T20I at Colombo: Pakistan’s No. 9 batsman, Anwar Ali made Premadasa his own by helping his side make 66 required from 35 balls.  Anwar produced an astonishing 46 from 17 balls, to help Pakistan steal a win from the clutches of almost-certain defeat. He brought the chase of 173 to sudden life when he plundered two sixes and a four off debutant Shehan Jayasuriya. Shahid Afridi’s brutish 22-ball 45 lit the flames that helped Anwar devour Sri Lanka. Sri Lanka, batting first, made 172 with a quick fire 48 by Chamara Kapugedara and Jayasuriya making 40. In their response, Pakistan got off to a horrific start losing 5 wickets for the score of 40. 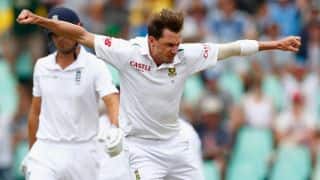