The umpires decided to adopt a curious strategy to prevent the bails from falling off. Unfortunately, it backfired.

October 29, 1932. A Melbourne Grade B women s match between Clifton Hill and Footscray witnessed a bizarre incident where cricketers used chewing-gum to keep the bails attached to the stumps. Abhishek Mukherjee looks back.

In Collet s Miss Wicket and Miss Trigger (1778) remains one of cricket s most iconic images. While Miss Trigger proudly displays her gun and three dead pheasants, Miss Wicket stands smugly with a bat, protecting a wicket with two stumps and a bail.

Unfortunately, the fairer sex was not as respectful towards the wickets a century-and-a-half later, during a Melbourne Grade B match between the women of Clifton Hill and Footscray though, as is often the case, the villains turned out to be men.

There was nothing unusual about the match per se. The match report in The Argus (Melbourne) included the following summary: Victory went to Footscray, which scored 70 to 47 in the first innings. It is not clear whether it was a two-innings match (why mention first innings if it was not?).

However, there was a curious addition to this report. It was a windy day, as a result of which the bails kept flying off the stumps. The umpires, both of whom were male, decided to combat this in a novel way: they used chewing gum to keep the bails attached to the stumps.

Was this in accordance with the laws? The 1884 Code does not mention anything about bail-tampering at all. Neither does any of its 16 revisions (the last being in 1937), so there was nothing against it per se.

However, Law 8.3 of the 1947 Code states the following: In a high wind the captains may agree, with the approval of the umpires, to dispense with the use of bails. It is safe to assume that there was no such rule against use of chewing gum in 1932.

So this was not illegal. There was also precedence. In his seminal Next Man In, Gerald Brodribb mentions the use of clay (third day, Australians versus Players, Harrogate, 1902) and iron bails ( once kept for use on the windy ground of Scarborough ). Sometimes nothing is of any use, and the wind has been troublesome that bails have been dispensed with altogether. There are at least a dozen instances of this, at places varying from Worcester to Wellington, added Brodribb.

But let us return to the match. One V Chick made 26 in the Footscray innings. However, there was a catch: when Chick was on 3, a ball had hit the stumps but the bails were not dislodged. According to the Melbourne Herald, the ball, it is stated, glanced on to the wicket off Miss Chick s pads, and shook them [the stumps], but the bails remained on the wicket.

Chick later survived a stumping as well under most singular circumstances: It was claimed that she was out of her crease when the Clifton Hill wicketkeeper touched the wickets with the ball, but was not able to dislodge the bails before the batswoman reached the crease.

If one deducted 23 from the Footscray score (Chick scored 23 after the first chance ), the match would have been a tie. Clifton Hill later raised a protest, despite having agreed to the conditions early on: they insisted on the match being replayed.

On November 26, less than a month after the incident, Victorian Women Cricket Association met on the topic. The committee, presided by LC Mills, dismissed the protest on the grounds that the Association have not a rule in their constitution to govern such an occurrence.

Five days after the incident, the following appeared under the popular column The Moving Picture Show on The Sun (Sydney):

My love, said Peter to Amelia. I earnestly pray that you will never be tempted to take up big cricket. I should hate to have it said of one dear to me that she used chewing gum to keep her bails unscattered.

When I first read of that Victorian case, said Amelia, I knew that all the mere men would seize upon it as a chance to sneer at us but who cares! You ve got to admit, Peter, that all the Graces, Trumbles, Jardines, Bradmans, Woodfulls, and Maileys in the world couldn t think of a simple little touch of strategy like that. It only goes to show how we truly resourceful and dangerous we poor weak women can be when it comes to the test.

Another piece appeared in The Times. It took them time to report in that part of the world, for they also had the small matter of Bodyline to cover.

The article was a light-hearted one, and ended on that note: Women cricketers are more fully equipped than are men for this doctoring. The shine on the new ball can be taken off by the same cosmetics which keep the shine off the nose, and much can be done with powder to mitigate slipperiness. Bowlers would find it useful to dye particular important spots on the pitch … What chance will poor old cricket have of increasing its present quite slight popularity among the more influential half of the human race?

They need not have worried. The first Women s Test was played in two years time. However, as for the ball-tampering predictions, some of their male counterparts would go on to think on similar lines later in that century. 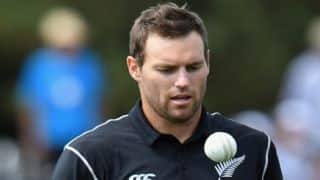 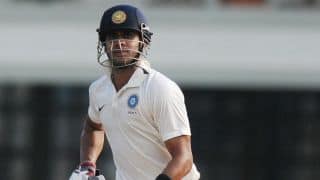