The month of September has given world cricket some of its finest gems. Here we take this opportunity and come up with a fantasy Test XI of cricketers who were born in this month.

The month of August has ended a week back. The new month of September brings new promises and new opportunities. The first month of the autumn, September has given world cricket some of its finest gems. Chinmay Jawalekar takes this opportunity and comes up with a fantasy Test XI of cricketers who were born in this month.

1.  Saeed Anwar, Pakistan (born Sept 6): On his day, Saeed Anwar would tear apart best of the attacks without any flashy stroke-play or force, something which he never relied on. His strengths were his elegant stroke-play, effortless timing and outstanding placement, which only few players could match. One of Pakistan’s best openers ever, Anwar first made a name for himself in limited-overs cricket. But with time, he established himself as a solid Test cricketer as well.  His impressive record in the format speaks for itself and places him at the top of the order in this XI.

2.  Chris Gayle, West Indies (born Sep 21): As Anwar’s career drew to a close, another exciting southpaw Chris Gayle’s career dawned. And unlike Anwar, Gayle first made a mark for himself in the longest format before going on to become the ‘Universe Boss’ after his exploits in the shortest format. People remember the ‘six-machine’ for his fastest hundred in T20s and the ODI double hundred, but Gayle is also one of only four cricketers to have two triple tons in Tests. One can only imagine the carnage this pair of Anwar and Gayle can unleash on any opposition.

3.  KS Ranjitsinhji, England (born Sep 10): Better known as Ranji, KS Ranjitsinhji easily finds a mention when we talk about game’s finest players. The most innovative batsman of his times, Ranji not only amassed runs at will, but also introduced new shots like late cut and leg glance. His First-Class record speaks volumes about his ability, as he scored around 25,000 runs in his career at an average above 56. He lends his services to this team as its one-down batsman.

4.  Martin Crowe (captain), New Zealand (born Sep 22): Coming from a cricketing family, Martin Crowe was already destined to do huge things. When he broke in to the cricketing scene, he was soon touted to become a legend of the game and by the time he retired, he was already his country’s highest run getter across formats and one of their most inspirational leaders. There are few who could beat him in the race for a spot at No. 4 in this team.

5.  Ian Chappell, Australia (born Sep 26): As described by the English commentator John Arlott, Ian Chappell was “a cricketer of effect rather than the graces”. He took over the reins of Australian cricket team when it was going through a bad patch and left an indelible imprint on it by the time he passed on the baton. His captaincy was inspirational and it showed in the team’s performance, as it never lost a Test series under him. As a batsman too he added great value to the team with his partnerships with brother Greg being remembered by fans even today.

6.  George Hirst, Eng (born Sep 7): Lord Hawke described George Hirst, a right-handed batsman who used to bowl left-arm medium fast, as the greatest County cricketer of all time. This quite aptly sums up the cricketer’s credentials. One of the finest to come out of cricket’s golden age, Hirst’s story is quite similar to that of Amarnath. Though he did not exactly set the international cricket on fire, he remains an all-time County cricket legend. Over 36,000 runs at an average above 34 and 2,742 wickets at 18.73 apiece in 826 First-Class games make Hirst an all-time great. He finds a place at No. 6 in this XI.

7.  Brendon McCullum (wicketkeeper), NZ (born Sep 27): Brendon McCullum’s approach to his game was simple — attack. The only way McCullum knew to get runs was by launching a brutal assault on the bowlers, no matter what the score read. He played his brand of cricket irrespective of the situation and got desired results. The first captain to lead New Zealand in a World Cup final, McCullum was equally aggressive when it came to captaincy. He may not have kept wickets regularly in his career, but in this XI, he finds place as a wicketkeeper.

8.  Ravichandran Ashwin, Ind (born Sept 17): World cricket’s leading all-rounder at the moment, there is nothing Ravichandran Ashwin cannot do. A captain’s pride, Ashwin can bowl inside the power-play overs, can bowl at death, can take quick wickets, can contain runs and can bat up the order. During the recently concluded Test series between India and West Indies, Ashwin received his sixth Man-of-the-Series award. He was the leading wicket-taker as well as hit two hundreds batting at No. 6. In this side, however, Ashwin gets to bat at No. 8. Also, he will not be the leading spinner of this team. That role has been reserved for a magician.

9.  Mike Procter, SA (born Sept 15): Mike Proctor may be best known by the current generation of fans for being the cruel Match Referee who banned Harbhajan Singh for three matches on the charges of racism during the second Test of 2007-08 Border-Gavaskar Trophy, but he was an extremely fast bowler for South Africa in his playing days. Once described as man who bowled “at 100mph from mid-off off the wrong foot”, Procter played only 7 Tests during his career which was affected by apartheid. Had he played more Tests, he would have easily been bracketed alongside legendary all-rounders like Ian Botham, Imran Khan and Kapil Dev. His First-Class record — 21,936 runs at 36 and 1,417 wickets at 19.53 apiece — says it all:

10.  Shane Warne, Aus (born Sept 13): There won’t be many teams where Ashwin would play second fiddle. But when the king of spin is around, there is nothing else you could do. Shane Keith Warne, inarguably the greatest spinner of all time and a wizard with the red cherry, graces this team with his services. Warne, who made the dying art of leg-spin fashionable once again, ended his career with record 708 Test wickets. Australia still miss his services, as neither before nor after Warne was there a spinner like him.

11.  Curtly Ambrose, West Indies, (born Sep 21): Sir Curtly Ambrose terrorised the batsmen world over with his huge frame, lethal pace and venomous stare. A miserly and wicket-taking bowler, Ambrose never spoke much and let the ball do the talking. His majestic record — 405 wickets at 20.99 apiece — made him eligible for the elite club of cricketers who have received the knighthood. Ambrose is the spearhead of this XI’s attack.

12th man: Lala Amarnath, India (born Sep 11): India’s first Test centurion, Lala Amarnath lends solidity to this team by featuring at No. 5. A monumental figure in Indian cricket, Amarnath’s Test career was not a true reflection of his potential. But when you take a look at his First-Class figures — 10,426 runs at over 40 and 463 wickets — you know what a genius he was.

The team looks balanced and has all its bases covered. Specialist batsmen, all-rounders, two quality spinners and tearaway pacers; the team has it all. With Warne at 10, it has depth in its batting. In conditions conducive for fast bowling, team has Ambrose, Procter, and Hirst to deliver while in Indian subcontinent, it has Warne, Ashwin and Gayle as the back-up. All-in-all, it looks a formidable unit, which can give any international side a run for its money. 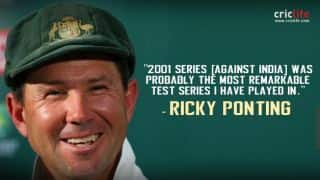