Aakash Chopra has provided a huge boost for the younger 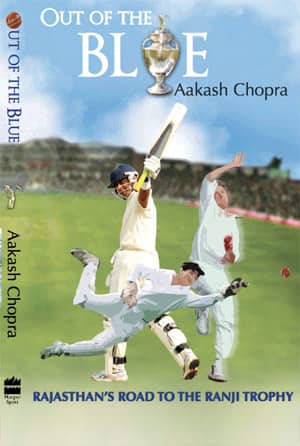 As the pages pass by in Aakash Chopra’s brilliant book, “Out Of The Blue“, the Tendulkars, Dhonis and the like fade away from thoughts. Largely unknown first-class cricketers who maybe momentarily remembered for their performance on that day and then forgotten, or were just another name seen in a scorecard, are given life. The touching stories of their struggles would make the reader to pay more attention to their games and performances, and this is where Chopra has provided a huge boost for the younger, unglamorous and struggling lot, says Vincent Sunder in his insightful review of the much-acclaimed book.

From wondering why the news reporter mistakenly omitted his name from the Delhi Ranji squad and the subsequent realisation that he had in fact been dropped, through to being part of another state’s Ranji Trophy triumph, the effort and result of Aakash Chopra’s second book, “Out Of The Blue” is a gripping and heart-warming read. It simply is not just a recollection of the games that were won by Rajasthan enroute to winning the Ranji Trophy. It goes deeper with gripping stories of the personal suffering of many of those who made the dream come true.

Whist Test games are suffering from a serious lack of spectators at the game, what crowds can be expected to witness the country’s premier domestic tournament, the Ranji Trophy? Books like the one penned by Aakash could probably help in this direction. After the recovery from the shock of being discarded and the call that gave him another opportunity to continue, the narration then leads the readers to give some very touching insights to the massive obstacles that key players had to overcome to be where they belonged. These stories are both overcoming personal battles as well as overcome situations caused by the authorities who run the game.

Whether from economically-affluent backgrounds or from virtual poverty, the challenges that were overcome by players precede the recollection of the games that led to the ultimate victory.

–      There is the affluent player who had everything going for him, including the India Under-19 captaincy. He then fell from grace with a loss to Pakistan and blamed in an adverse report by the coach of the side. And the misery was compounded by an injury that kept him away from the game for six months.

–      We then have another affluent player from Delhi who was second only to Virat Kohli in the Under-19 ZCA games but failed to make the India Under-19 side. The subsequent disappointment almost made him give up the game.

–      We also have the son of an IFS officer who was constantly told to do something ‘sensible’ rather that waste time playing cricket, and the home battles he had to win to finally make the cut.

–      The touching story of a player who loses his father, his two-month old daughter and in his jobless times brings a parrot home to alleviate the sorrow. One fine day “he too went away…” never to come back.

–      There is story of the Class IV railways employee, initiated into the game with a view to mitigate his asthmatic condition with some physical activity; the paucity of time which makes him carry cricket balls to shadow practice when he was not required to do his job of handling tokens.

–      The story of yet another Class IV railway employee whose brother is bed-ridden for three years after a freak accident; his father being forced to shut down his humble electrical shop and slipping into health issues that finally take him away; a second brother who works part time to support the family whilst studying, and then the ultimate tragedy of losing his mother to cancer after a lot of suffering.

–      The story of the only son with four sisters who topped the school exams but failed to clear his 12th standard board exams and his struggles before he makes his first-class debut in borrowed cricket shoes!

–      The story of a wrongly-discarded player whose request for an NOC to play elsewhere is rejected by the State, and also is banned for a year on disciplinary grounds (was skipping games to appear for exams the reason?)

–      And we have the son of a sergeant in the IAF, who builds a cricket pitch and uses cheap halogen bulbs around the nets to facilitate practice from 7.00 p.m. to 10:30 p.m., with uncles; trips to Delhi to get videos of top fast bowlers for making observations and making mental notes!

As the pages pass by, the Tendulkars, Dhonis and the like fade away from thoughts. Largely unknown cricketers who maybe momentarily remembered for their performance on that day and then forgotten, or were just another name seen in a scorecard, are given life.  The touching stories of their struggles would make the reader to pay more attention to their games and performances, and this is where Chopra has provided a huge boost for the younger, unglamorous and struggling lot.

Chopra’s simple narrative is gripping much like an olden day James Hadley Chase or a modern day Lee Child thriller. There is no bitterness expressed where things went wrong for him personally before he became part of a new side, there is no personal adulation that crows about his own performances; there is appreciation for his new employers where he explains the situations where they were provided better infrastructure and living conditions. The bonding and cake celebrations, the ‘pre-habilitation’ programme makes for interesting reading. The way they dealt with sides that looked down upon them in the final stages are narrated without any rancour.

Out Of The Blue is a creation that every cricket follower must read and own as part of his collection. The expressions are a must read for those administering the game as well. It would be of immense value if the book is made a part of the curriculum of both national and state cricket academies as well as private academies, given the invaluable insights and learning that budding young cricketers can benefit from.

Mention must be also be made on the very interesting snippets that occupy the corner of every other page. A distraction when reading the book, the reader would enjoy reading this after completing the book first!

The disappointing aspects of this book come with the production. Was this book rushed into release? The paper could have been of better quality and more importantly the pictures, in this digital age, are of very poor quality. For a book that would be of historical value as well, the scorecards are found wanting. Apart from missing bowling analysis, fall of wickets have been completely missed out. Let’s hope the reprint of this book would take care of these cosmetic shortcomings.

(Vincent Sunder aspired to play Test cricket, but had to struggle to play ‘gully’ cricket! He managed a league side to title triumph in the KSCA tournaments. He was debarred from umpiring in the gully games after he once appealed vociferously for a caught-behind decision when officiating as an umpire! After two decades in the corporate sector, he became an entrepreneur with the objective of being able to see cricket matches on working days as well.  Vincent gets his ‘high’ from cricket books and cricket videos and discussing cricket)

Leaking news: India's recipe for success for the tour of Australia