AB de Villiers vs Shakib Al Hasan and other key clashes in Bangladesh vs South Africa 2015, 1st T20I at Dhaka

AB de Villiers vs Shakib Al Hasan and other key clashes in Bangladesh vs South Africa 2015, 1st T20I at Dh

Bangladesh get ready for their biggest Test hosting South Africa at home.

Bangladesh get ready for their biggest Test hosting South Africa at home. Nikhil Popat looks at the key clashes going into the first Twenty20 International (T20I) at Dhaka.

Bangladesh host South Africa for a long tour which starts with a couple of Twenty20 Internationals (T20Is). The first one will be held at Dhaka on July 5, 2015, marking only the third time these two teams face each other in the shortest format of the game. While Bangladesh are coming off an impressive series win against India, South Africa having not played any cricket since their heart-breaking loss to New Zealand in ICC Cricket World Cup 2015 semi-final will hope to dust off the rust. READ: Bangladesh vs South Africa 1st T20I at Dhaka Preview

There will be no Dale Steyn, Morne Morkel which gives Bangladesh some breathing space but the Proteas have enough bowling talent to trouble the hosts. The following are the important key clashes going into the game. READ: Bangladesh await their biggest test at home against South Africa

AB de Villiers vs Shakib Al Hasan: AB de Villiers needs no introduction at all and it goes without saying how crucial he will be to South Africa’s chances against a resurgent Bangladesh side. Shakib Al Hasan has had a quiet time since the ICC Cricket World Cup 2015 in Australia and will be itching to contribute to his team’s success. If de Villiers settles in, he can take on anyone and Bangladesh will hope their ace all-rounder steps up to get rid of the dangerous South African very early in the game.

Faf du Plessis vs Mashrafe Mortaza: Mashrafe Mortaza has been an inspirational figure for Bangladesh cricket fans. He bowled through injury in the game in ICC Cricket World Cup 2015 where they knocked out England. He fights till the very end and does not shy away from taking responsibility if needed. He will come up against Faf du Plessis, the skipper of South Africa who has started his T20I career decently and with ICC World Twenty20 2016 coming soon, he will want to find his groove since one of the best batsmen playing spin bowling and the conditions in Bangladesh can ripe for someone like him to play through.

JP Duminy vs Mustafizur Rahman: Mustafizur Rahman woke the world up with his cutters. He took as many as 13 wickets in the three-match One-Day International (ODI) series and had the Indians gasping for runs. With success come expectations and he will be expected to keep taking wickets. South Africa being an orthodox side in terms of strategies and will have done their homework to face the 19-year old. JP Duminy had a superb Indian Premier League (IPL) season with Delhi Daredevils and will want to continue his good form. He has had weakness against spin bowling and he will be happy that Bangladesh now plays with more seamers but rest assured he will be tested against the smart variations of Rahman.

Mushfiqur Rahim vs Chris Morris: Mushiqur Rahim was in brilliant form in the series against Pakistan but had a rare quite series against India. He loves to take on the best in the world and is possibly the best Bangladesh batsman. He though will come up against a masterful bowler in the shortest form of the game, Chris Morris. Morris has been a regular feature in most domestic T20 sides around the glove and it will be no surprise if South Africa prefer him over the wayward Wayne Parnell. Morris will want to cement his place in the side with the World Cup coming up next year.

Soumya Sarkar vs Kyle Abbott: Soumya Sarkar has been in prime form and is easily the most elegant looking Bangladesh batsman. Sarkar can hit the ball on the up at ease even against the fastest of bowlers and he will enjoy the extra pace from South Africans. Kyle Abbott had an impressive time in Australia during the World Cup but he was dropped for an unfit Vernon Philander for reasons best known to Cricket South Africa. With no senior bowlers in the squad, Abbott will be expected to lead the attack and continue his good form of picking wickets. 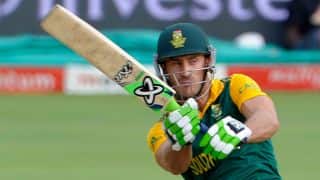