The first impressions of Milne is that he is an athlete and has a big heart to bowl fast.

There is hardly anything that matches the thrills and spills of watching a thoroughbred fast bowler charging into the crease with an impassioned soldier-like tenacity, and scaring the wits of a batsman playing with cold hands in fear. It stirs the crowd and even lifts the fielding side to dive around like panthers. When Adam Milne of New Zealand bowled a few quick spells in the recent series against the West Indies, it seemed to have lifted the sagging spirits of an entire New Zealand line-up.

It has been a while since Milne was earmarked for success after he took a stackful of wickets in his debut First-Class game against a fine Canterbury batting line-up on paper. At the tender age of just 18, he even played for New Zealand in a Twenty20 International (T20I) match against Pakistan.

Milne on his fascination to bowl with venomous pace said, “At the start of high school I was a runty kid and bowled little mediums. Then at the end of sixth form [at Palmerston North Boys’ High School], I started bowling a lot quicker than I had before and that’s when I thought if I run in hard I can bowl quicker than a lot of people,” stated Milne.

The first impressions of Milne is that he is an athlete and has a big heart to bowl fast. Arguably, key factors to succeed for a quickie. For an outsider, watching it from a distance, just like Jason Gillespie of Australia, he seems to hit the bat harder than what a batsman anticipates him to. The razor-sharp delivery that shapes back into the right-hander seems to be his stock delivery.

Unfortunately Milne has been crippled by a spate of injuries including ankle and achilles’ problems. It has made the New Zealand think-tank to wrap him up in cotton wool and allow him to play only that odd T20 or One-Day International (ODI) game.

In fact, one noticeable change since those days of him being constantly injured is that Milne from being a pencil-like frame has bulked up a little bit. As former fast bowlers say, the key to bowling quick over a sustained period of time without getting injured is to strengthen your legs. Even Mitchell Johnson, who has resurrected his career with spellbinding performances in Ashes 2013-14 is said to have spent his blood, sweat and tears in strengthening his legs.

It also has to be remembered that Milne has played only a handful of First-Class games, and he can work his way up the ladder only by playing more four-day games. Actually, New, Zealand’s stratagem of shielding Milne from the longer format of the game is perhaps not helping him. In T20s, young bowlers when they get thumped tend to lose the plot and it can have an effect on their confidence. It requires unwavering self-belief to bowl in the shortest versions of the game.

In T20 cricket, a quick bowler is usually asked to bowl at full throttle during his quota of four overs, whereas in First-Class cricket, a young quick bowler can gradually build up his pace. So, there is a school of thought that contrary to the general opinion, T20 cricket may be the prime reason as to why so many young bowlers find themselves in the knackers yard at such a young age. In his brief career, Milne has struggled to make his mark in either of the shorter formats. It gives an inkling that the strategy is flawed.

Former New Zealand all-rounder Chris Cairns certainly doesn’t believe in that theory and spoke to Radiosport on the subject of firebrand fast bowler, Milne being wrapped in cotton wool, “If you try and cotton wool people you’re actually giving them a false perception of what’s required at that level so it’s about making sure that people understand they’re going to get hurt and it’s how you deal with that.”

Hopefully, Shane Bond, who at present is the coach of New Zealand would be able to guide the young shining light. Milne, on his childhood hero and current bowling coach of New Zealand, Bond said, “I’ve worked with him (Bond) since I was 17 when he came to Champions League Twenty20 with the Stags. He’s been really good, having been at the top level, he knows what’s required and the discipline you need.”

To bowl fast in the modern era can be a thankless job. With those bazooka bats, a batsman can just bludgeon you through the line and thwack it into the stands. Yes, one can instill the fear factor in a batsman, but it needs a pacer to strive every sinew and a single-minded focus of believing that come what may you won’t cut down on pace. Adam Milne is still a greenhorn and perhaps lacks that mongrel to send shivers down the spine of the batsmen. But he is yet another of those young quickies who has emerged out of New Zealand’s cricketing stables in the last few years, and that should bring smiles on the faces of New Zealand fans. 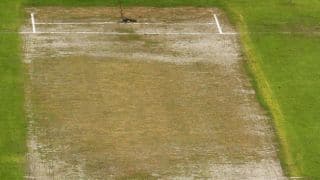