Whether or not Adam Voges deserves to be No. 2 in the list of top averages in Test history does not matter. The fact remains that he is.

Adam Voges is only the second batsman in the history of Test cricket with a minimum of 1,000 runs to average more than 90. He is behind only Don Bradman, a figure so legendary that his batting average of ‘99.94’ is essentially a part of cricketing lexicon. Bradman played for 20 years from 1928 to 1948. It has been nearly seven decades, but few have made it to the 1,000-run club with an average in excess of 90. Before Voges the closest anyone had got to even remotely challenging The Don’s batting average in recent times was a man they called Mr Cricket, but the height of Michael Hussey’s post 1,000-run average was 86.33, a far cry away from 99.94. FULL CRICKET SCORECARD: New Zealand vs Australia, 2nd Test at Christchurch

At present Voges is not only in the vicinity of Bradman — he averages 94.78 at the time of writing — he has a realistic chance of going past him in the near future. The advent of Voges has pushed no less a batsman than Wally Hammond, The Don’s biggest rival (if there was one), out of the top 10 batting averages in Test history. To put that in perspective, batsmen not in the top 10 include Garry Sobers, Jack Hobbs, Len Hutton, Kumar Sangakkara, Jacques Kallis, Sachin Tendulkar, and Brian Lara, among others. READ: Adam Voges briefly betters Sir Don Bradman Test average of 99.94

Voges has batted in 20 innings, so the sample size is not as tiny as seems (it is certainly more than Andy Ganteaume’s). His average has been helped by the fact that he has remained unbeaten in six of these innings. He has also scored two big double-centuries, further enhancing his reputation. READ: Adam Voges surpasses Don Bradman, Sachin Tendulkar

Below is the list of the top 20 batsmen in Test history by batting average with a cut-off of 1,000 runs:

Now let us look closely at Voges. He has played 15 Tests, five each against West Indies, New Zealand, and England. A break-up of his runs tell an interesting tale:

The immediate stat that stands out is the inhuman average of 542 (no, that is not a typographical error, there is no misplaced dot anywhere) against West Indies, by far the weakest of the top Test nations in the world. He has scored three centuries in four innings against them, including his highest score of 269 not out. He has been dismissed by the West Indians just once, which explains the gargantuan average. READ: Adam Voges vindicates Australia’s faith in seasoned campaigners for Test cricket

He has also been prolific against New Zealand, averaging a superb 97.33 against them with one innings still to go in the ongoing Test. He has scored two centuries and two fifties in eight innings, which includes his second Test double ton.

However, it is against England that Voges’ batting average crashes to human levels. He averages less than 30 against the arch-rivals, which is a massive departure from his usual standards. He struggled in The Ashes 2015 on surfaces where Steven Smith, Chris Rogers, and David Warner did well. READ: Adam Voges displays batting prowess, and how!

This begs the question of whether or not Voges is actually as good as his numbers suggest. West Indies are without doubt the weakest that they have ever been in their Test history. A bowling attack comprising of Jason Holder, Jerome Taylor, Kemar Roach, Shannon Gabriel, and Jomel Warrican is not likely to give an ‘A’ side nightmares, much less Test cricketers. READ: Test cricket records: The “oldest” to everything

Also bear in mind that barring his top class 130 not out on debut, Voges rarely succeeded when those around him failed; when he scored 269 not out at Hobart he had Joe Burns (33) and David Warner (64) softening the bowling and Shaun Marsh (182) giving him company. Then when he scored 106 not out at MCG his was the fourth century of the innings. READ: Adam Voges: Oldest to score a century on Test debut

On the other hand, when Australia were bowled out for 136 and 265 at Edgbaston Voges contributed 16 and 0. He was dismissed for 1 at Trent Bridge when Australia infamously crashed to 60 all out. At Cardiff he made 31 and 1 when even Mitchell Johnson scored 77. On a seaming Adelaide wicket in the Day-Night Test he scored only 13 and 28.

There is no doubt that Voges is an excellent batsman who is making complete use of the opportunities he has got. Whether or not he deserves to be No. 2 in the list of top averages in Test history does not matter. The fact remains that he is. The question is whether he can sustain it when Australia take on Pakistan and South Africa at home and more importantly when they tour India.

After Virender Sehwag, Ravichandran Ashwin opens up on violence in Haryana 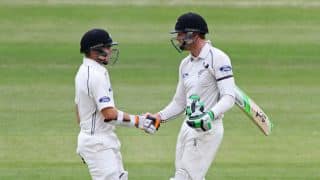