When KL Rahul is at his most fluent, he is a sight for sore eyes, a veritable delight with his all-round strokeplay accompanied by a graceful elegance that comes only with the very gifted

For nearly three-quarters of an hour, KL Rahul embraced abstinence. Temptation had forced him to pay a heavy price two days earlier, he wasn’t going to fall into the trap once again, not so quickly in the piece.

The embattled opener, caught betwixt and between in a conundrum not of his making, has been struggling for meaningful consistency all year long. In 2017, nine half-centuries, seven of them on the trot, in 14 Test innings invigorated his march to 633 runs at 48.69. The only criticism then was that he hadn’t been able to convert even one of those nine fifties into a hundred.

The voices have been more strident in 2018, a suffocating dose of overseas Tests in exceptionally difficult batting conditions in South Africa and England not helping his cause. Rahul arrived in Australia with a mere 420 runs from 10 Tests and 18 innings, his average of 24.70 owing plenty to 149 in a losing cause at The Oval in the final innings in England.

It wasn’t merely the string of low scores that was worrisome. Rahul has been a streak player in more ways than one. His latest unedifying streak, apart from the lack of regular runs, was a distinct vulnerability to the ball coming in at pace. His last eight Test dismissals ahead of the Australia series included four leg befores and four bowleds, hardly doing his reputation as an excellent technician any good.

This has been a difficult year for Rahul beyond the obvious. Having been yo-yoed through the batting order in One-Day Internationals without getting enough chances to play himself into or out of the XI, he now finds himself relegated to the status of third opener, biding his time for one of Shikhar Dhawan or Rohit Sharma to either lose form horribly or pick up an injury. That can be a particularly depressing scenario, and it would appear as if it has had an impact on Rahul, given the way he has approached red-ball cricket this year – with an outward nonchalance bordering on the indifferent.

There is a reason why Rahul was able to overturn a disastrous Test debut in Melbourne four years back and back it up with a hundred in the following game, at the SCG. There is a reason why he is rated so highly, especially within the team set-up but also from the outer. There is a reason why so many want him to do well. When he is at his most fluent, he is a sight for sore eyes, a veritable delight with his all-round strokeplay accompanied by a graceful elegance that comes only with the very gifted.

Those characteristics have only sporadically been on view this year. Hopes that The Oval hundred would trigger a turnaround in the second half seemed unfounded as he courted repeated failure against Windies at home in October. When he was out to a disappointing distant drive in the first innings at the Adelaide Oval on Thursday, the road to redemption was immediately hijacked by nails, rocks, spikes, boulders, snakes, gremlins… You get the picture.

The Rahul that came out to bat on a stop-start Saturday (December 8) was a different beast to the hesitant batsman of two days back. For the first half-hour or so, he barely looked the ball in anger. The discipline and restraint that had so ditched him 48 hours ago were on full view as he reined his natural instincts in, determined to build India’s 15-run advantage in the company of M Vijay, his great mate.

Denial was the underlying theme as Rahul tortoised to 1 off 27 and Vijay to 3 off 30. Australia’s new-ball threat was systematically dismantled, Cheteshwar Pujara and Virat Kohli getting enough time for a breather, for a change.

Without warning, Rahul then exploded into a series of breathtaking strokes. A scorching aerial drive off Josh Hazlewood that screeched to the cover fence opened the floodgates, and while he was occasionally guilty of chancing his arm once too often, when he made contact, it was oh-so-sweet. Pat Cummins came in for special treatment, a gorgeous square-drive that went deep into the stands beyond the point boundary backed up by a classical cover-drive that mocked the slowness of the rain-pounded outfield and forcing the bowler to temporarily shelve self-imposed niceness.

Vijay enjoyed the entertainment from the best seat in the ground as the openers brought up fifty. By the time the senior opener was dismissed in a carbon-copy of the first innings, driving away from his body to be caught behind the stumps, the first-wicket pair had consumed 110 deliveries. It was the first time since Centurion in 2010, when Gautam Gambhir and Virender Sehwag put on 137 in 177 balls, that an Indian opening pair had batted more than 20 overs in a Test outside Asia.

Rahul possibly lived a little too dangerously once he decided to go on the attack, which manifested itself in the occasional waft-and-miss routine, particularly when the fast men found disproportionate bounce on a steadily deteriorating surface. The way he was dismissed, throwing his hands at the ball away from his body with his feet glued to the crease, might not have won him many friends, not with tea less than a quarter of an hour away. But at least some of the demons had been slayed, some of the internal battles won, some of the all-consuming ‘bad fire’ doused. This 44 in 67 deliveries, three bruising fours and that phenomenal six thrown in, could yet catalyse the second coming of KL Rahul. 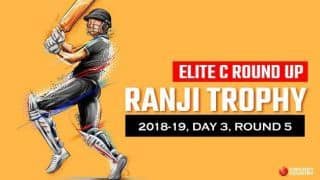