Aishwarya Rai Bachchan is trending for a reason and Pakistan cricketer Umar Akmal wondered with a reason. The beautiful Ash walked on the Cannes red carpet in a floral Rami Kadi dress and her look was completed with purple lips, something that even puzzled the KKR fans!

Bollywood superstar Aishwarya Rai Bachchan is trending for a reason and Pakistan cricketer Umar Akmal wondered with a reason. The beautiful Ash walked on the Cannes red carpet in a floral Rami Kadi dress and her look was completed with purple lips.

For a moment, many cricket fans thought that after the angelic Taher Shah, Shah Rukh Khan had now roped in Aishwarya as the new mascot for his IPL side Kolkata Knight Riders. Usha Uthup in purple bindi, Taher in the purple angelic robe and now Ash with purple lips? No, later co-owner Jay Mehta confirmed that there is no truth to the story and thankfully after the AB de Villiers and Virat Kohli mayhem, there was no more shock in store for the KKR fans. ALSO READ: Breaking News: Shah Rukh Khan appoints Taher Shah as Kolkata Knight Riders’ mascot

Ash also promoted her upcoming film Sarbjit, a film based on true events about an Indian prisoner locked in Umar Akmal’s country. For not any political reasons Akmal was unhappy when the pictures first surfaced on that. Brother Kamran overheard him murmur, “When I apply those zinc oxides, fans never miss out on trolling me but why not the same logic for Ash.”

He would be relieved to know that the actress too was dearly trolled on social media. Meanwhile, pop sensation (or whatever angelic genre he sings) Taher Shah was seen gazing at the following pictures and our sources close to him tell us that now he plans to pen down a ‘lip’ song, inspired by the angelic, colourful and spectrum lips. As if the song on ‘pink lips’ was bearable!

While all this happened, somewhere in Queensland, Andrew Symonds was unhappy when he came to know of Taher’s ideas. We do not blame Symmo. With a fishing stick on one hand and a beer mug in another, Symonds’ grunted, “Ask that stupid man to stop monkeying around!”

Anyways, if Taher proceeds with his plans, even Barrack Obama and Bashar al-Assad will join hands to counter the mankind’s angel.

Damn Ash! Life was going smooth. Why give out such ideas? 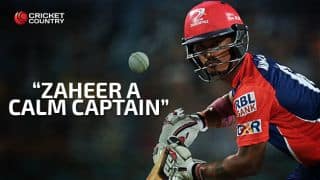 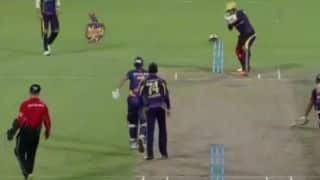