BJ Watling will want to guide New Zealand to a big total on Day Four.

The second Test between England and New Zealand has ebbed and flowed ever since the first day. It needed someone to put take the mantle and get ahead with the game. New Zealand found it in BJ Watling.  Nikhil Popat talks about how New Zealand might have found a hero in the man they might not have expected to find one in.

BJ Watling was injured on during the first Test between England and New Zealand at Lord’s. He had seen his team lose from a winning position; he came out to bat despite being injured and scored well and was left stranded for 61 in the first innings. In the second innings, he scored another fifty but cannot get his team to safety and New Zealand lost the game by 124 runs. READ: BJ Watling’s ton puts New Zealand on top against England at Stumps on Day 3 of 2nd Test at Headingley

There was a doubt whether New Zealand would play Watling in the second Test since Tom Latham had taken over the wicket keeping duties. They had Luke Ronchi among their ranks as well. Corey Anderson was hurt too. They did lack a bowler at Lord’s, nobody would have said a word if Watling had not played and had New Zealand gone in for an extra bowler. But the Black Caps knew how good a batsman the preferred keeper was. They went with it, Watling had two fifties to show. They risked it and how good was he for them?

Watling was cleaned up by Mark Wood in the first innings, for a low score, his first failure in the game. England were on top then, New Zealand came back with the second new ball to stay in the game, bowled out England for a score 350 after a mammoth 177-run opening stand between Alastair Cook and Adam Lyth. Such was the manner of the game, one team would threaten to go forward and the other would come back just in time to halt the other’s progress. READ: Trent Boult’s day out against England at Headingley

New Zealand lost two quick wickets, Ross Taylor and Martin Guptill brought them back in the game with a 99-run stand. England struck back again. Mark Wood this time gets rid of both the set batsmen to keep the game in balance. This was the course of the Test, the game wanted someone to step up, someone to own the game and put their team in control. Brendon McCullum— the aggressive McCullum— had to tone down his aggression, curb his instincts, since he knew he could not afford to get out. The situation had got the better of him and rightly so.

But nothing stopped Watling, the man who might not have played this Test and no one would have complained about it too. He comes in, starts positive. That has been the way the visitors have played this series— positive but not many have had their line of aggression controlled. He has no shuffle, no exaggerated movement towards the ball, he just stands in his crease, bat lifted, waits for the ball to come and plays the right shot to the right ball. No fuss, no audacious stroke play, just normal orthodox strokeplay. READ: Tom Latham battles James Anderson, New Zealand, and himself

He outscored his skipper to a fifty. Who would have thought it was even possible? Here when the natural aggressor is playing sedately, the Wicket keeper-batsman is not shy of playing his natural game—natural game of knowing his limitations and working around it rather than trying to be like someone. He watches his skipper get out, struggling to get back to his natural game. You sense, this is the moment, the lead is just 260 for now. Any more wickets and the Kiwis would lose control, which is what is expected.

Alastair Cook rings in the changes, he wants wickets, such has been the norm for the Kiwis, one wicket has brought another, but it is not coming here. Watling finds support in Ronchi. Ronchi has the benefit of the platform, he scores a quick 31. Watling is not worried about him being overshadowed. He already is in his zone, he knows his job, and he waits patiently at the other end. He is nearing his ton. Cook now brings back Broad, England’s second best bowler after Wood.

Four overs to close of play, Broad bowls a half-volley outside off, Watling unfurls  a lovely drive, one that pleases the eye, it is not about power here, it is about timing, placement, orthodox batting. He gets to 96. He carves one away to point for a single, goes to 97 waits for Craig to play out the over. READ: Looking back at the 116 years of Test cricket at Headingley

He does not take it for granted as the next ball he faces, spits at him from a length, he fends it off but that should worry England for they will bat last. Watling plays out overs, takes a couple of singles to get to 99. Two overs to go, James Anderson comes in, Watling pulls the short one to fine leg, there it is, his fifth Test ton, he becomes the first New Zealand player to score a ton at Headingley, but he is normal, none funky and a simple removal of helmet, raise of bat to a crowd who acknowledge his effort.

Watling’s teammates stand up for him, as he plays out the day with Mark Craig. He leads players off the field. He has led them in literal sense, in a line-up full of stroke players, scoring flashy runs in quick time, here the low-key member, a man who might not even have played this game, has scored a 137-ball 100 to put New Zealand on top.On a day where neither team was finding ways to get on top, Watling showed how sometimes even the old, orthodox, so-called boring way of playing the game can also work wonders and the Kiwis found a hero in a man nobody would have blamed them for not picking in the Test. READ: England face toughest summer amid controversies 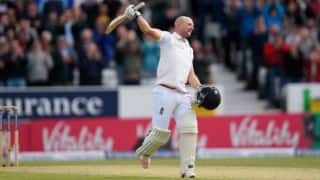 Identical first inning totals for both teams in a Test