On an action packed day, New Zealand finished on top thanks to BJ Watling's ton against England in 2nd Test at Headingley.

New Zealand are into ascendancy against England at the end of Day 3 of the 2nd Test at Headingley. The Kiwis are 338 for six at the end of play after 75 overs on Day 3 and with the lead already past 300 and the deck doing a bit, they will feel they have enough on the board already.

Stuart Broad had pegged back the Kiwis early on with two early wickets before Martin Guptill and Ross Taylor put New Zealand back on track with an aggressive 99-run stand. Martin Guptill scored his 14th Test fifty but Ross Taylor fell for 48. Mark Wood was the bowler to dismiss both Guptill and Taylor in a spell to bring England back in the game at Tea. Brendon McCullum and BJ Watling then put on a 121-run stand to get New Zealand to safer shores. McCullum brought up his 29th Test fifty but fell on 55 leg before to Wood who continued to bowl well.  Full Updates: England vs New Zealand, 2nd Test, Day 3 at Headingley

Watling and Ronchi though played with a bit of freedom to ensure that they got the lead past 300. Both of them put on 53 runs together before James Anderson had the better of Ronchi and got him caught behind for 31. Watling then went onto score a century, his fifth in Test cricket and in the process also became the first New Zealand player to score a ton at Headingley.

New Zealand came back to bowl out England for exactly 350 today morning. Alastair Cook (75) and Adam Lyth (107), who scored his maiden Test ton had put England in control with a 177-run opening stand but Tim Southee with four for 83 along with Trent Boult 2 for 98 ran through the rest of line up barring Stuart Broad. Broad hit an enterprising 42 to ensure England stayed in the game.

England earlier bowled out New Zealand for 350 on Day Two. Tom Latham (84) and Luke Ronchi (88) missed out on tons as they had taken New Zealand to 297 for eight at end of Day One. The lower order from New Zealand played cameos to take them to 350 as Broad took his 13th five-wicket haul in Tests. Full Scorecard: England vs New Zealand, 2nd Test, Day 3 at Headingley

England won the toss on Day One after rain had delayed the start of the Test and inserted New Zealand into bat. They were unchanged. New Zealand replaced the injured Corey Anderson with Luke Ronchi. 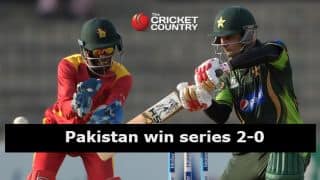 Pakistan-Zimbabwe 3rd ODI at Lahore washed out due to rain 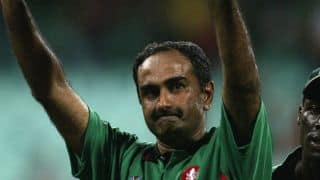