In the modern era of batting, Cook proved that there is room for the dour, stonewalling efforts required to save Test matches

The analog man in a digital world has called it quits. Alastair Cook, modern day cricket s last link to an era of Test match batting that has all but become obsolete, will play his last match for England this weekend at Kennington Oval, when the fifth Test against India gets underway.

Cook took the decision on Monday, admitting that there is nothing left in the tank . England s leading run-getter in Tests, at the age of 33, has called time on his international career during a series in which he is averaging 15.57. Since he shrugged off a poor run of form with an unbeaten 244 at the MCG in December 2017, he s averaged 18.62 with a solitary half-century.

That MCG double-century – Cook s fifth in Tests – had come after he failed to cross 37 in 10 innings from the time he ground out 243 against West Indies in Birmingham in August 2017. Each time Cook s runs have dried up and the critics have started to bray, Cook has bounced back. But there would be no shaking off the rut with another epic double-hundred this time. Even if Cook does score on against India at Kennington Oval, it will have no impact on his decision. He is done. Finito. For long he had gas in the tank even when the engine sputtered, but now it was too much.

The realisation hit Cook that the struggle wasn t worth carrying on with. The senses had dulled, edges found catchers, drives did not flow. It has happened to countless Test batsmen. Cook is one of the good ones, in the true sense of the word. You won t find anyone with a bad word to say about him. That should remain his abiding memory.

In the fast developing modern era of batting, when fans want boundaries and a rush of adrenaline, Cook proved that there is room for the dour, stonewalling efforts required to save Test matches. Perhaps the last Test opener with the gumption for a marathon innings where a higher price is put on defending rather that run-accumulation, he fashioned a record-setting career on what he believed were his strongest skills: defence and patience. And how it has worked for him: 12, 254 Test runs and 32 centuries. Scoring tough runs under pressure was Cook s hallmark, as captain and opener.

They don t make them like Cook anymore, as his former team-mate Nick Compton pointed out last week, and as Graeme Smith feared recently.

Apart from being a Test batsman from a different era, Cook is something of an anomaly in today s game. He isn t on social media. (He once said of it: If you have a beer at 1 am on tour and go on social media, you are instantly accessible to the rest of the world. It is quite dangerous. ) He isn t tabloid fodder. He doesn t attend celebrity events.

He plays one of three formats, and can happily slip back into relative obscurity when England are playing ODIs and T20Is and when the domestic season is over. Like MS Dhoni and his dogs and bikes, Cook loves his sheep on his family farm near Leighton Buzzard, a small town in Bedfordshire where he can go grocery shopping and not be harassed for his views on the broadening size of cricket bats or whether Jos Buttler should play in the IPL. He s happy living the farm life – galoshes, woollen friends, tractors and the lot.

I like to be a little old-fashioned, Cook once revealed. Even phones frustrate me.

Think of English summers, traditionally, and Cook s figure does not immediately come to mind. Such visions are generally associated with David Gower, Graham Gooch, Michael Vaughan and Kevin Pietersen. The flowery batsmen who force you gasp as they thread the gaps in the off side. Who pirouette as they pull, dance out to spin on twinkling feet and appear to cut the ball on tip-toes.

And yet barring the summer of 2010 when he struggled against Bangladesh and Pakistan, and this year against Pakistan and India, Cook has left a mark on each home season since 2006. His batting style does not put bums on seats. His pull shot is more of a clunk past midwicket, his drives in the off side workmanlike pushes. But he is as much of England s success at home as any other legend of the game from those shores. Cook is, in fact, England cricket.

One of the most humanising aspects of batting is when a player gets to three figures. A big smile, a leap in the air, a congratulatory bear hug with the guy at the other end or a red-faced roar – to see some variation of emotions being released is what fans love to eat up. With Cook, there was rarely a release of raw emotion. He would smile, boyishly, sometimes sheepishly, and acknowledge the dressing room. His cheeks would turn red. He would enjoy the moment, sure, but not get carried away.

And so when he walks out to bat in his final Test match this weekend, observe Cook closely. Watch his every movement, his honesty and his simplicity. He may score, he may fail, he may hang around for another middling innings that ends with a silly slap to third slip. Watch him when he fields at first slip, when he converses with the wicketkeeper, when he enters and leaves the field. Take a bit of time to savour Cook, the last of a special kind of Test batsman.

Because, to paraphrase Kevin Spacey s Verbal Kint, blowing a poof of air at Chazz Palminteri s U.S. customs agent Dave Kujan in The Usual Suspects, just like that, he’ll be gone. 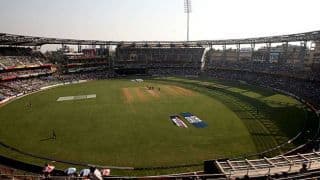