Alec Coxon should not have been able to bowl consecutive overs, but this was a special case.

On August 22, 1950, Alec Coxon bowled two consecutive overs in an innings from the same end of a First-Class match with consent from the umpires. Abhishek Mukherjee narrates how.

Bowling consecutive overs is not unheard of. It has happened twice in Tests since 1889 by Warwick Armstrong at Old Trafford in 1921 and by Alex Moir at Wellington in 1950-51. However, both instances involved umpiring errors, for both men bowled their overs on each side of an interval, and the men in white coats had overlooked the anomaly.

But even they were not the first to do this. Bowling consecutive overs was legal till 1889. Law 14 of the 1884 Code clearly stated the bowler may not change ends more than twice in the same innings, nor bowl more than two overs in succession.

Legendary cricket statistician Charles Davis notes that there have been at least two dozen such instances in Test cricket. This included Allen Hill in the first ever Test and Fred Spofforth in both innings of the 1882 Test that gave birth to the Ashes.

That changed in 1889. As per Law 14: The bowler shall be allowed to change ends as often as he pleases, provided only that he does not bowl two overs consecutively in one innings.

However, in all these instances, before 1889 or otherwise, whenever the bowlers had bowled consecutive overs legally, they had bowled from different ends. Even Armstrong did the same, though data for Moir is not available.

However, there was an additional condition, that of incomplete overs: if a bowler could not finish an over (a not-too-rare occurrence) the over would be considered complete and a fresh over would begin at the other end.

Let me guide through the contest first, for it was a close one. Sussex secured a 107-run lead before Johnny Wardle and Norman Yardley bowled them out for 151. Then Len Hutton took over and sculpted 71 in a way only he could.

However, a mini-collapse saw Yardley out in the middle at 118 for 4. He helped Willie Watson add 65 for the fifth wicket. Watson carried on, losing Alec Coxon and Wardle, but Eddie Leadbeater stayed put. The pair added an unbeaten 40 for the eighth wicket to seal a win.

Watson remained unbeaten on 96 but then he knew a thing or two about competitive sport. He had returned from the FIFA World Cup in Brazil the month before.

Readers must have guessed what had happened by now. Coxon opened bowling in the Sussex second innings with John Whitehead. Then Whitehead injured himself as he ran in to bowl the first ball of an over. It was evident that he would not be able to bowl, at least at that point.

Obviously someone else had to bowl but from which end? Umpires Bill Ashdown and John Bell conferred before deciding that the ball, despite not being delivered, was in play the moment Whitehead had begun his run-up.

That also meant that the over had commenced. And since Whitehead would be unable to finish the over, someone else would have to bowl from the other end.

Surprisingly, the law stayed till the 1980 Code. Law 22 of the new code stated: If, for any reason, a Bowler is incapacitated while running up to bowl the first ball of an over, or is incapacitated or suspended during an over, the Umpire shall call and signal dead ball and another Bowler shall be allowed to bowl or complete the over from the same end, provided only that he shall not bowl two overs, or part thereof, consecutively in one innings.

That is the way things stand now. 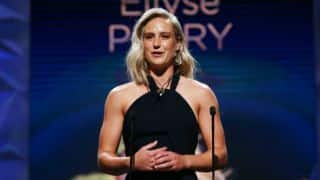