Six years ago, Stanford was touted by many to change the fortunes of West Indian cricket with the introduction of Stanford 20/20. But Holding did find the entire process shady right. He dedicates an entire chapter in his book to cite anecdotes of why he constantly couldn’t help but get a feeling that Stanford was doing more harm than good to West Indian cricket. 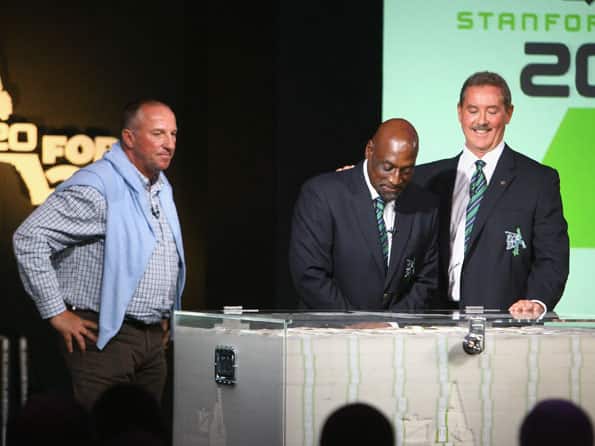 Sir Allen Stanford (R) shows Sir Ian Botham (L) and Sir Viv Richards the US $20 million during the press conference for the Stanford 2020 tournament at Lord’s on June 11, 2008 © Getty Images

“Appearances can be deceptive. To the world, Sir Allen Stanford would have looked like a chubby-cheeked and jovial benefactor ready to bankroll West Indies cricket as he revelled in his ‘Stanford Twenty20 for $20m’ one-off cricket match. Like any good politician, with cameraman in tow he constantly toured the ground he had built, kissed babies, bounced pretty ladies on his knee and mingled with players in the dressing rooms. But from my experience, the real Sir Allen was somewhat different,” stated Michael Holding in his autobiography No Holding Back.

Six years ago, Allen Stanford was touted by many to change the fortunes of West Indian cricket with the introduction of Stanford 20/20. This tournament was a competition between the Caribbean Islands, with the winner getting to walk away with a cash prize of US$1 million. The runners-up were rewarded handsomely, too. What this tournament did was it pumped a considerable amount of money into the cash-starved Caribbean islands’ boards – or so thought many. But Holding did find the entire process shady right from the beginning. He dedicates an entire chapter in his book to cite anecdotes of why he constantly couldn’t help but get a feeling that Stanford was doing more harm than good to West Indian cricket.

Holding felt that Stanford’s primary motive was not to improve the state of West Indian cricket, but that the latter got involved in it mainly because ‘he wanted to boost his own ego, his own companies and, eventually, his own bank balance.’ When the $20million Stanford Super Series happened, the West Indian Cricket Board (WICB) wasn’t paid its due share of $3.5 million, whereas the England and Wales Cricket Board received the same amount without any hassles. Holding states in his book that he could ‘assert that the WICB was forced by Sir Allen to sign a contract giving up its right to be paid $3.5 million.’ “That ‘cheap’ shot confirmed what I had already known. How can you propose to be helping West Indies Cricket and then do such a thing?” writes Holding.

When Stanford met Holding a few years ago and stated that he had plans to steer West Indies cricket out of trouble and take it back to its days of glory, Holding was pleased. But his heart sank the moment Stanford revealed his approach. When Stanford told Holding that he intended to start a Twenty20 tournament and help West Indies cricket, Holding’s exact words were “You’ve lost me, Mr Stanford,” Holding found it difficult to comprehend how a T20 tournament could help revive West Indies’ Test glory. West Indies was known for its supremacy in the Test format, and a revival in the Test arena was the only way they could regain their lost reputation; not by a T20 competition.

Holding declined Stanford’s offer to help him set up the tournament. Nevertheless, Stanford went ahead with his plans. He developed a board of ‘Legends’ that consisted of 14 former West Indies cricketers. Clive Lloyd, Lance Gibbs, Ian Bishop, Sir Everton Weekes, Desmond Haynes, Courtney Walsh, Sir Viv Richards, Sir Garfield Sobers, Gordon Greenidge, Joel Garner, Wes Hall, Richie Richardson, Curtly Ambrose and Andy Roberts were a part of it. But Stanford was still downcast on the fact that Holding was not a part of the ‘Legends’. He continued to persuade Holding to the point that the latter got ‘irritated’. Holding finally gave in to the persuasion, and a few months later became a member of the board.

But Holding’s tenure as a board member didn’t last long. Altercations with the board members and Stanford himself led Holding to resign from the ‘Legends’. Apparently, Holding wasn’t happy with the way the money given by Stanford was being utilised by a few islands’ boards. When Holding raised this concern during a Legends meeting, Stanford decided to stop funding all the boards immediately. Holding was surprised at Stanford’s knee-jerk reaction and told him that it wasn’t the right solution, and that not all boards were taking wrong advantage of the money. He tried in vain to convince Stanford that the situation can be rectified by other means. Majority of the board members didn’t back Holding in Stanford’s presence, but agreed with his opinions once Stanford was out of their sight. An irate Holding immediately decided to call it a day.

A few incidents thereafter left a sour taste in Holding’s mouth. Stanford almost went to the point of controlling the WICB. He went on to aggressively express his displeasure at the unavailability of some players who were at that time away on national duty. This was further evidence for Holding that for Stanford it was all about himself and not West Indies cricket.

Now, six years later, Stanford has been sentenced to 110 years in prison. Not only did he take the English and West Indies cricket board for a ride, but he managed to deceive the world. For someone who’s seen the way Allen Stanford does his dealings from close quarters, Michael Holding would be the last person to be surprised at this verdict. Stanford has closed all exit doors for himself with his arrogant and aggressive behaviour. That behaviour doesn’t seem to have melted yet. “I’m not here to ask for sympathy or forgiveness or to throw myself at your mercy. I did not run a Ponzi scheme. I didn’t defraud anybody.” Stanford told the judge.