On August 31, 2001, Pakistan, playing against Bangladesh in the Asian Test Championship at Multan, registered their biggest Test win. The match also holds a special place in history as it was a rare instance wherein five batsmen scored a century in one innings. Aayush Puthran revisits the match and the tragic story that silenced all celebrations for the hosts. On August 31, 2001, Pakistan, playing against Bangladesh in the Asian Test Championship at Multan, registered their biggest Test win. The match also holds a special place in history as it was a rare instance wherein five batsmen scored a century in one innings. Aayush Puthran revisits the match and the tragic story that silenced all celebrations for the hosts.
In the merriest of times, there were scenes of mourning. Unusual as it might seem, but a match that should’ve generated little interest ended up being the base of various record-breaking feats in Pakistan cricket, yet inflicted with pain.

August 31, 2001: Pakistan had bundled out Bangladesh in two and a half days and secured their biggest Test win. Skipper Waqar Younis’s aim of gaining maximum points out of the match was achieved with an innings victory. During the course of the match, many records tumbled and many more were made — most famous being the five centuries that were recorded in one innings. Yet, there were no signs of jubilation on the field or in the Pakistani dressing room. What transpired during those two and a half days was overshadowed by a tragic announcement at the end of the match.
Day One

Even as the scorching heat was turning unbearable, touching nearly 40 degrees Celsius, a crowd of over 12,000 gathered to witness Multan host its first Test match after a gap of more than 10 years, and for the newly-built stadium it was its first game.

With Bangladesh, who were yet to achieve a win in the longer format, the crowd would’ve had to beat their wildest imagination to realise what lied in store in the contest apart from a dull lop-sided affair.

With Shoaib Malik and Taufeeq Umar set to make their debuts, there was as much at stake for them as there was for Danish Kaneria and Inzamam-ul-Haq.

Inzamam, who was playing for the first time on his home turf, wanted to realize his childhood dream of scoring a century at Multan.

Kaneria, on the other hand, couldn’t afford another below-par performance as he was competing for a spot with the experienced Mushtaq Ahmed and was coming into the match at the back of two ordinary performances. With the pitch expected to aid spin, he didn’t have an excuse either at his disposal.

Pakistan pace attack, led by Wasim Akram and Waqar, was expected to make the best possible use of conditions after the visitors won the toss and elected to bat first. Although, Akram managed to beat the bat quite often, he would have felt unfortunate for not being able to bag a wicket. Meanwhile, Waqar at the other end, continued to leak runs.

Against the run of play, Javed Omar gifted Malik his maiden Test catch and the visitors were reduced to 20 for one.

While the seamers didn’t turn out to be effective enough, their contribution in the innings ended with another wicket — that of Habibul Bashar — to Waqar’s credit. From there on, it was the rather reserved threat of Kaneria and Malik that spit venom on the Bangladeshi batsmen.

Kaneria especially, extracted bounce and turn from the pitch finding batsmen in awkward positions while playing their shots. In the space of less than 25 overs, the two young spinners had bundled out the weak batting line-up. Kaneria returned with six for 42 — his best figures in Test cricket and his first five-wicket haul.

In less than half a day, it was Pakistan’s turn to bat.

If Kaneria’s leg-spinners weren’t enough trouble for Bangladesh, they were wounded further with brutal assaults by Pakistani openers. Debutant Taufeeq Umar and the experienced Saeed Anwar sent the clueless bowlers leather hunting. During the course of his innings, Anwar went past 4,000 runs in Test cricket.

With around 15 overs remaining for the day to come to a close, Bangladesh found their first chance to celebrate as Anwar’s 104-ball 101 run innings came to an end. Mohammad Sharif came back in his next over to uproot the stumps of Faisal Iqbal and bring back some momentum on the side of the visitors even as the hosts had taken 44 runs lead in the first innings.

Nonetheless, even as the crowd had been entertained with some excellent quality cricket by the home side, Iqbal’s wicket was followed by the loudest cheer, the moment they were all waiting for.

In walked the burly 31-year old Inzamam, a national hero by then, committed to a promise, involved in minor personal battles even as the larger war seemed like a fun game by now.

He, along with Taufeeq, guided Pakistan safely to the end of day’s play with no further damage and a lead stretching to 85 runs.
Day Two

Little would’ve the crowd expected from Day Two which in a matter of 90 more overs went down the annals of cricket history. Taufeeq, resuming at 77, steadily went about the business — with little demons on the pitch and negligible danger from the bowlers in the opposite rank — to bring up his century.

He went on to become the eighth batsman from his country to register a century on debut. The left-hander joined the likes of Khalid Ibadullah, Javed Miandad, Saleem Malik, Mohammad Wasim, Ali Naqvi, Azhar Mahmood and Younis Khan after getting past the prestigious three-figure mark. It was also the first instance of both left-handed openers scoring a century in the same innings of a Test match.

However, the century celebrations didn’t last long as a lapse in concentration led to Taufeeq’s dismissal as he provided a faint edge to the keeper and was dismissed against the run of play.

As it turned out, the wicket happened to be the visitor’s sole reason to celebrate on the day as the batsmen continued to muster runs at an easy brisk pace. There seemed no offering by the Bangladeshi bowlers on that day which could cause any trouble to their batsmen. Local boy Inzamam sent the ball 15 times to the fence and once over it.

Over 12,000 cricket fans had turned up to watch the match on Day Two, braving the pain of baking heat and a dull affair. Inzamam ensured that the crowd was given enough moments to celebrate and cherish even as he wobbled and struggled his way battling cramps. However, he kept up with the promise of scoring a ton on his home ground. The heat soon got the better of him and he had to retire hurt with Pakistan sitting pretty at 381 for three.

However, it was one of those days on the field when things only went from bad to worse. When Abdul Razzaq walked out to bat, Bangladesh would’ve expected things to improve. However, his brutal power hitting only worsened the home side’s agony.

His brutality was exactly what would’ve have lightened up the contest and Razzaq did just that. The all-rounder who came out to bat with Yousuf Youhana already on a well-compiled 60, raced to 70 by Tea. Youhana just managed to add 17 more runs till then.

If the second session exploits weren’t good enough, Razzaq and Youhana returned to race away to their respective centuries.

Razzaq’s ton was the second-fastest by a Pakistani batsman after Majid Khan’s 74-ball effort.

While the Pakistani innings was declared at 546 for three, many other records had also tumbled during the course of the innings

With 412 runs deficit in the first innings, Bangladesh were well and truly out of the contest as their openers came out to the crease for the second time in two days.

And if there were any chances of a sensational comeback, Pakistan skipper Waqar ensured that the wickets were picked at regular intervals as he burst into action soon by sending both the openers back to the pavilion.

Substitute fielder Younis Khan too jumped into action using his reflexes well to dismiss Animul Islam as the day ended at 55 for three for the visitors.
Day Three

It was only a matter of time before Bangladesh were sent packing home and Pakistan had bagged full 24 points from the encounter. However, little would’ve the two teams known that it would take less than a session to wrap things up.

Kaneria was back in action after a fine show in the first innings. He continued to trouble batsmen with awkward bounce and turn to find edges for the close-in fielders to pounce on. He returned with match figures of 12 for 94. As it happened, Bangladesh’s innings was wrapped up in 41.1 overs, exactly the number of deliveries the visitors faced in the first innings.

In the match, ten Bangladeshi batsmen were caught close to the bat. Younis Khan entered the record books by pouching four catches, an innings record for a substitute.

With Bangladesh on 148 for nine and skipper Waqar Younis at the top of his bowling crease to bowl the 42nd over, the body language of the fielders didn’t seem inspiring enough as they were heading towards a record victory. There seemed a sense of gloom for reasons unknown. Waqar ran in to bowl the first delivery and disturbed the stumps of Manjural Islam. However, there were no celebrations. The two teams shook hands as the Pakistani team headed back to the pavilion.

The match, on some other day, would’ve also left the organisers at Multan dancing with joy for putting up a good show and to see it being attended by over 12,000 people each day in the most testing conditions.

Just as everyone was wondering why was there a low-key end to the match, a tearful Anwar made the announcement that his three-year old daughter Bismah had died of prolonged illness on that day. It was a tough day for the left-hander and was to become a key moment in his career and life.

Man of the Match: Danish Kaneria 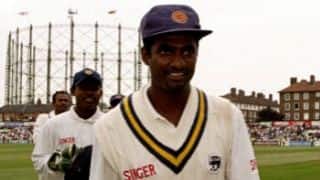 Muttiah Muralitharan bamboozles England with his spin; takes 16 wickets at The Oval