Angelo Mathews alone bailed his side out of trouble only to see them fold up once he was out.

Sri Lanka were in a tricky position in the second Test at Colombo against India but once again it was skipper Angelo Mathews who led them brilliantly with the bat only to find little support from the rest. Nikhil Popat writes about how smartly Mathews paced his innings in an aim to script a perfect farewell for Kumar Sangakkara. READ: Have India finally settled on the perfect Test combination?

“We can’t thank him [Kumar Sangakkara] enough for what he has done for Sri Lankan cricket and the team over the past so many years. We thank him truly and wish him all the very best in his future endeavours. The best we could do is try and win the game so that we win the series. That will be the best farewell for him. We are trying our best to do that. The boys are all well prepared. We trained extremely hard in the past two days, even though it rained yesterday, on all aspects of the game and we are ready to go.” Angelo Mathews had this to say a day before the start of the second Test between India and Sri Lanka at P Sara Oval, Colombo. He acknowledged that India had them by the throat for three and a half days before the hosts showed character to come back and win the opening Test at Galle.

There was no hesitancy in the way Mathews went about expressing his desire to win this last game for a legendary cricketer who has served the island nation for such a long time. Mathews is fast becoming a revelation for Sri Lanka as a Test captain; he currently averages over 70 as skipper. India had posted a strong total of 393 on the board, and Sri Lanka had lost the wicket of Kaushal Silva late on the second day, Mathews came in with his team still trailing by over 200 runs. READ: Virat Kohli must back his decisions

Sri Lanka do not play the “aggressive” and “positive” brand of cricket all the time. They are more than happy to play the waiting game, testing the patience of their opposition, grinding their way into the game. You hardly see Sri Lanka come out all guns blazing until they are pushed into a corner. Dinesh Chandimal rode his luck in the first Test at Galle but here Angelo Mathews was waiting to play himself in and then take the game forward. READ: Kumar Sangakkara — one of the very best ever

Mathews had a tricky start to his innings; he was beaten regularly by Umesh Yadav and Amit Mishra while he was new to the crease. His first boundary also came off an edge that then ran down to the third man fence between second slip and third slip. But that did not stop Mathews from playing the ball on its merit and putting the bad balls away with disdain. Sri Lanka saw through the final session on the second day at 140 for 3, trail by 253 runs. READ: Kumar Sangakkara and that cover drive: A match made in cricketing heaven

The first session of a day is often crucial as they set the tone for the rest of the day. When Mathews saw Virat Kohli hand the ball to Stuart Binny for the second over of Day Three, he went after Binny in a calculated manner and hit him for couple of boundaries. It was not that he was not tested later; there were a couple of chances especially early on, but none went to hand. His clip off the bowling of Ravichandran Ashwin went wide of the man at forward short leg fielder, while Mishra kept beating him with well tossed-up googlies. A close-in fielder went, “Usko yeh pasand nahi (He does not like it there)!” But Mathews was ready to lose the small battles to win the bigger ones.

There was a lull before he got to his fifty, his third score in excess of 50 runs in his last four innings. He got a couple of freebies from India to see him through to the lunch break, at which point Sri Lanka trailed India by 169 runs. The hosts had not lost a wicket in the morning session, and his knock also brought out the best from Lahiru Thirimanne, who scored his fourth Test fifty. READ: KL Rahul offers India potential solution to No. 3 crisis with ton against Sri Lanka in 2nd Test

Rain too made an appearance but no doubts crept into Mathews’ game as came out his usual self post lunch. He pulled a short one just after the rain interval for a boundary to midwicket. Two more boundaries followed in the next two balls, as Mathews just ensured that India would have work hard to come back in the game. He saw Thirimanne depart after losing his patience, and saw Dinesh Chandimal come and go in a jiffy. Suddenly the ball started to play tricks at one end but nothing troubled Mathews. Not many balls went past his bat without his control. He took his time with wickets falling to get closer to his ton. And it turned out that those wickets slowed him down as well, robbed him off his usual momentum at the crease. READ: Virat Kohli’s positive cricket leads India forward in 2nd Test against Sri Lanka at Colombo

On 96, he clipped one towards mid-wicket from Stuart Binny and wanted a single but was sent back in time. Nerves seemed to have had him there as he followed it up with another dab towards the off side. He wanted to get to the milestone quickly; he was dominating the bowling in the morning session but was forced to curb his aggression now. READ: Rohit Sharma: Prodigy or Tragedy?

On 97, Mathews clipped one off his pads towards Rohit Sharma at backward short leg where Rohit collected the ball and threw it up in the air celebrating the wicket. To his horror, the umpire did not find it out and rightly so; it had come off the pads. Mathews now was more than desperate to get done with the formalities of getting to his ton.

And it came the very next ball, flatter leg spinner on leg stump, Mathews went for the reverse sweep and found the gap through point to get to his century, his sixth one in Tests, fifth one as a Test captain for Sri Lanka. He’s been the fighter, the best batsman for Sri Lanka in whites for the past few years. The following table illustrates his record from 2013: READ: #ThankYouSanga: Virat Kohli keeps cricket’s innocence alive

Mathews by now was subdued and playing the situation rather than his natural game. Seeing a decent length ball outside off, he went for it. He was leaving the ball brilliantly till then, but he edged that one ball from Binny and was caught at first slip, handing Binny his maiden Test wicket.

And it was all the same once again for Sri Lanka; Mathews alone bailed his side out of trouble only to see them fold up once he was out. Sri Lanka lost seven wickets for 65 runs to get bowled out for a score of 306. Sri Lanka conceded a 87-run lead and it might also be a big one in context of the game and Sri Lanka again fell short in providing Mathews the best of support. READ: It is time for “Captain Kohli” to step up 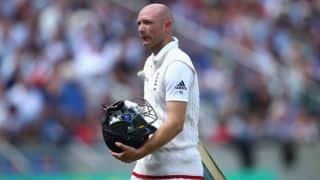 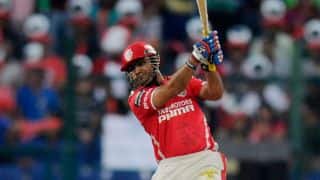