No other Indian bowler comes close to Kumble's staggering record at the highest level.

Anil Kumble will go down in history as one of the greatest cricketers of all time. He is the leading wicket-taker for India in Tests as well as One-Day Internationals (ODIs). He played his last international game almost seven years ago. Kumble became the fourth Indian after Kapil Dev, Bishen Singh Bedi and Sunil Gavaskar to be inducted into the ICC Hall of Fame. His induction in this elite list is not surprising, feels Pramod Ananth, as he looks back at some of the moments that comes to his mind, when he hears the leg spinner’s name.

Watching Kumble bowl always bought a smile on my face as I knew that something eventful is going to happen in each and every ball he bowls. He formed a formidable partnership with off spinner Harbhajan Singh from 1999 to 2008. When I think of Kumble, there are few things that automatically come to my mind.

10 for 74 against Pakistan at the Feroz Shah Kotla in Delhi on February 8, 1999: Pakistan needed 420 in the fourth innings to win the match but after an excellent opening partnership between Saeed Anwar and Shahid Afridi, Kumble began the destruction, first by dismissing Afridi caught behind and followed it up with the wicket off Ijaz Ahmed off the very next delivery. Bear in mind, this Indian team had the likes of Javagal Srinath and Venkatesh Prasad at their peaks. From 101 for no loss to 207 all out meant that India had beaten Pakistan at home for the first time in 26 years. But more importantly, that day will be remembered for those 10 wickets Kumble took in that innings. Nobody has been able to emulate it since.

Trivia: The climax of Meerabai Not Out was based on Kumble’s famous spell.

Six for 12 against West Indies: In a batting line-up consisting of the likes of Jimmy Adams, Brian Lara and Carl Hooper among many, one would have not dreamt that West Indies will collapse like the way they did in the 1993 Hero Cup finals at Eden Gardens, Calcutta. Chasing a modest 226 for victory, West Indies, would have been confident of winning the match under the lights. But they surely would not have expected Kumble to show what he’s truly capable of. The batsmen were unable to read his flippers and would often find themselves a touch late in playing shots. Kumble picked up the last six wickets of the match and finished with figures of six for 12, which was the best bowling figures in ODIs by an Indian bowler until recently bettered by Stuart Binny’s six for four against Bangladesh.

Trivia: During the innings Kumble clean bowled Roland Holder. The ball came so fast that the umpires had to refer it to the third umpire. Outside run outs and stumpings, this was the first decision referred to a third umpire in international cricket.

Hit by a bouncer, yet continues playing: In India’s 2002 tour of West Indies Kumble was hit by a Mervyn Dillon Bouncer right on his jaw. Although he was well protected with a helmet, he suffered a broken jaw. He still managed to bat a further 20 minutes and was eventually dismissed for a 17-ball six.

He then came back and bowled with bandages wrapped around his jaw and picked up the wicket of Brian Lara for four.  The five-match series was level at 1-1 going into this game at St. John’s, Antigua.

Kumble left for his hometown of Bangalore the next day and he went on to say, “At least I can now go home with the thought that I tried my best”. Such was Kumble’s commitment to the game, his team and country. Any other player would have probably sat out and recovered, but the fighter in Kumble did not let him lay down and he came back on to the field and gave it his best. That was an inspiration to me and many others I’m sure.

Scores maiden century against England: Anil Kumble had to wait till 2007 to get his maiden international century. He got it during the third and final Test at The Oval during India’s tour to England. What made it special was the fact that none of India’s top order batsmen like Sachin Tendulkar, Sourav Ganguly, Rahul Dravid and VVS Laxman could score a century on that tour. Kumble, therefore became the only Indian batsman to score a century on that tour.

Post-Sydney Test press conference in 2008: After a controversial second Test at Sydney, it was not the players, who made a name for themselves, it was the umpires. Mark Benson and Steve Bucknor made one blunder after another and let Australia off the hook umpteen times. After India suffered a heavy loss due to poor decisions, Kumble, the captain of the team then, addressed the press after the game and started it by saying, “Only one team played in the spirit of the game”. The match was also marred by controversies surrounding Australia batsman Andrew Symonds and India off spinner Harbhajan Singh. Symonds claimed that Harbhajan uttered the word “monkey”, for which Harbhajan was handed a ban after a hearing, which found him guilty. India threatened to pull out of the tour but still carried on and finished the tour with their heads held high.

Celebration after dismissing Andrew Symonds at Perth in 2008: After the controversies mentioned in the Sydney Test above, Kumble got the wicket of Symonds in the second innings and celebrated it in a way that you’ve never seen him before. After Symonds was adjudges LBW, Kumble like a little kid jumped about three to four times while his hands were pointing towards the pavilion. India went on to win the third Test by 72 runs and drew the fourth and final Test at Adelaide, as a result conceded the series 2-1. The way Kumble led the team in that series was indeed commendable.

Quits without a fuss: Just like MS Dhoni’s retirement surprised everyone, Kumble too retired at a time when not many expected him to retire. He had missed the second Test, and the injury plagued him during the third Test at Kotla as well. He announced his retirement at tea on the final day, and set Australia a target of 245. There were only eight overs left, and Kumble, taking new ball, went flat out in search of wicket, but alas — for once his beloved Kotla  returned him empty-handed despite the support from the crowd Matthew Hayden and Simon Katich played out the remainder of the overs. Kumble’s last delivery was smashed down the ground for a boundary, which ended a career spanning 18 years with 619 wickets to his name. No other Indian bowler comes close to his staggering record at the highest level. 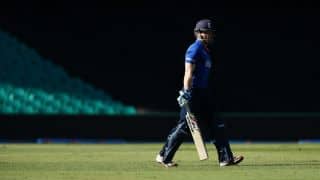