Perhaps No 3 is the spot for Watson as he has scored two tons there.

Shane Watson’s ton at Perth came at a time when he was under pressure to perform. The year 2013 has seen an inconsistent ride for him. Perhaps No 3 is the spot for him to make his presence felt, as he has scored two tons there. Nishad Pai Vaidya reviews Watson’s ton.

On his day, Shane Watson can take any bowler apart and wallop him to all parts of the ground. The front-foot strides forward with authority and he plays with flair. In the third Ashes Test 2013-14 at Western Australian Cricket Association (WACA) Ground, England were at the wrong end of Watson’s fire-power, as he took the game away from them. The Watson on view at WACA was a different batsman; intent on playing his natural game and dominating the bowlers all the way. Thus, when he is in such a mood, he approaches a Test match like an One-Day International (ODI) match and doesn’t hold back from expressing himself. Although Australia were in firm control of the game, Watson was clearly under pressure due to his recent inconsistencies and this innings may turn out to be a jail-break for him.

Such big scores have been few and far in between for Watson. Throughout the year, he has been under pressure to hold his spot in the line-up. There was that tough tour to India with the infamous homework-gate episode. That was followed by the Ashes series in England where the hosts won the series after sealing the big moments. Plus, there was some chatter from the ex-coach Mickey Arthur.

The runs dried up, although he did get off to starts.

Before the fifth Test at The Oval during the English summer, he had only one fifty in eight Tests in 2013. There was a fifty at Chester-le-Street in the fourth Test and then that brilliant 176 in the final game at The Oval.  His century at The Oval raised hopes that his dry run had come to an end, but once the Ashes commenced Down Under, he took his time to do well again; he failed in the first Test, before a mixed outing at Adelaide. And now, he has bounced back with this brilliant ton at Perth.

Watson is one of the senior players in the Australian batting line-up and is expected to be more consistent. There are no doubts over his quality, as he can win games single-handedly with the bat. The thing that may have saved him during his lean spells is the fact that Australia are short on experience and he also adds to the side as a bowler. Had any player gone through such a lean trot
(as he did before The Oval Test), he may have been axed from the side. But not Watson, as he is pivotal to Australia’s resurrection.

Now that he has essayed the innings that was expected of him, it is important that Watson carries on and takes it into the coming games. At No 3, he has a huge responsibility on his shoulders and that is perhaps the best position for him to bat. He did open the batting and quite successfully but had to move down the order as Australia found David Warner to play that explosive foil upfront. Watson is thus the attacker and someone who sets the tone at No 3. The others to follow would do well to build on the base setup by him.

With a Test average of around 35, one would say that a batsman of the calibre of Watson is certainly capable of a lot more. So far, he has only four Test tons, two of which have come in the last four months; both batting at No 3. Before that, he had only two tons in an eight-year long Test career. No 3 may be his destined spot after all. 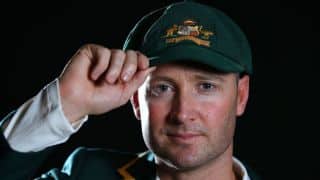