Smith played a relatively patient innings in the partnership as Haddin was going all guns blazing.

Steven Smith came to the fore for Australia yet again with a fluent 115 off 154 balls on Day One of the fifth Test at the Sydney Cricket Ground (SCG) on January 3, 2014. He came in when Australia’s score was at 78 for three. Michael Clarke had just been outfoxed by the impressive Ben Stokes. Australia had already lost David Warner and Chris Rogers very early in their first innings. The England bowlers, although not bowling all that well, managed to snare a few early wickets.

The pitch at the SCG for the 2014 New Year’s Test had a lot of grass on it. Alastair Cook won the all-important toss and elected to field first. Cook had lost the previous four tosses to counterpart Clarke. There was enough in the wicket to test all the Australian batsmen, who have been in sublime form in the series. The England bowlers, however, did not bowl right lengths. They were too short and did not allow the ball to move off the pitch. When they did pitch it fuller, they were rewarded or at least troubled the batsmen.

After Smith’s arrival, Shane Watson departed just on the stroke of lunch to James Anderson. Soon after the break, George Bailey was sent packing by Stuart Broad as Cook took two grabs at the catch at first slip. Australia were at a precarious 97 for five. Along with Brad Haddin, Smith began the rebuilding of the innings at the rate of knots. The whole afternoon session was dominated by Australia. They scored 107 runs in the session at a rate exceeding four runs an over.

Smith played a relatively patient innings in the partnership as Haddin was going all guns blazing. The England bowlers looked out of sorts as Haddin hit the good deliveries for boundaries. When given a chance, he was ready to free his arms. The duo shared a 128-run stand for the sixth wicket. Haddin scored a brilliant 75 off 90 balls. He struck 13 fours in his innings. Haddin has now scored at least a half-century in each of the five matches in the series.

Haddin was dismissed by Stokes and then Smith took charge of the innings. He did not let debutant leg-spinner Scott Borthwick settle in and used his feet quite regularly against him. As Smith neared his century, the intervals between boundaries were faster. He charged Borthwick and hit a six over long-on to get to 99. On the next delivery, he pulled a full-toss towards the mid-wicket region for a four. With those runs, Smith reached his third century in Test cricket and the second in the series. All his hundreds have come against England.

His first Test ton came in the fifth Ashes 2013 Test at The Oval. His second came in the third Test of the current series in Perth at the WACA. It was during this innings that Smith bailed his team out from a difficult situation. His century went a long way to ensure Australia won the match and also regain the Ashes over their arch-rivals. Smith does not have too many great scores to boast about in the series, but when his team needed him the most, he did not fail. With the third ton, Smith has surely sealed his spot in the Australian batting order for the near future.

Australia kept losing wickets at the other end and in search of runs, Smith played one expansive shot too many and was dismissed by Stokes. That was the England all-rounder’s sixth wicket of the innings. Smith struck 17 fours and one six in his innings. Australia were bowled out for 326. England then lost Michael Carberry early for a duck. They are eight for one at stumps on Day One, with Cook batting on seven and night-watchman Anderson on one. Australia’s lead is still a big one to overcome as the difference is 318 now. Given England’s abysmal batting in the series, Australia clearly have the upper hand and Smith, along with Haddin, has given them that.

Smith bats at No 5 in the batting order, so one may not see him get the big scores. But regular innings like these can put him in a bracket where he is termed as “Mr Reliable” or “Mr Dependable”. Smith also has an X-Factor and scores quickly. So, within a matter of overs, he can change the momentum of a match. Big tests await the combative batsman in the near future, but for now he is passing through the early ones with flying colours. 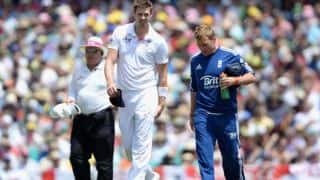 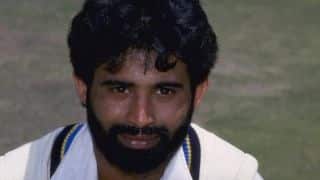