Both Clarke and Cook live in a world which cannot afford concepts like ‘patience’, ‘mercy’ or ‘sympathy’.

They come from different cricketing cultures, nurtured in polar-opposite environments, but their careers have shaped up somewhat identically. Australian captain Michael Clarke and his England counterpart Alastair Cook face a world full of challenges every time they lead their respective sides on to cricket fields. Life becomes tougher when they are leading their respective teams in The Ashes: both Clarke and Cook go through some of their toughest months of their lives as cricketers and outside of the sport. Devarchit Varma tries to define what exactly is going on in the lives of Clarke and Cook, keeping the present scenario in mind wherein both Australia and England may win or lose The Ashes 2015.

Alastair Cook has played four more Tests than Michael Clarke despite making his debut two years later. Clarke barged into international cricket in 2004, while Cook landed in 2006. Clarke may be having a Test hundred in his kitty extra than Cook and a batting average few points better, but Cook enjoys an aggregate of over 9,000 runs in Test cricket. As per his current form, Clarke will need at least 10 Tests to go past Cook, and Cook five more Tests at least to strengthen his lead, but that is not what we are getting at. ALSO READ: Ashes 2015 no less than test of character for Clarke and Cook

Both Clarke and Cook live in a world which cannot afford concepts like ‘patience’, ‘mercy’ or ‘sympathy’. Their respective media would be after their blood in the wake of a defeat, and at the same time, it will leave no stone unturned to praise them in victories. ALSO READ: Michael Clarke’s captaincy in Ashes 2015 lacks flexibility

Indeed, Clarke and Cook, if they meet over few drinks after end of their respective careers, will surely have a lot to laugh about looking back at all of it. ALSO READ: Ashes 2015: Michael Clarke’s lack of runs dangerous for Australia

On cricket fields, both Clarke and Cook lead immensely talented cricketers, but none who could be rated as legend-in-making. This, for now, is safe to say. Steve Smith may have transformed into a run-machine from an ugly-looking Australian spinner touted as a replacement of Shane Warne four years ago, but the journey has just begun. Joe Root may have shown supreme class and gumption, but he is vulnerable on many fronts. To start with, Root is yet to score overseas as heavily as he does at home. Smith has done that somewhat. Are they legends in making, we will get to know this about a decade from now.

Despite having innumerable match-winners, not often do Clarke and Cook see their men deliver on the promise. Inconsistency is a trait that affects fortunes of international teams profoundly, but indiscipline is something that takes them down to the pits from where they have risen with all the hard work. If you want to know why England lost at Lord’s and Australia at Cardiff and Edgbaston, analyse how they fared keeping these two characteristics in mind.

Captains do not lose cricket matches, teams do. They lose because they play cricket poorly — far off from what they can do. Australia lost at Cardiff and Edgbaston because they were atrocious. England lost at Lord’s because they were horrendous. But at the end of the day, it is Clarke and Cook who got more than just earful.

Coming to their individual performances, it has been ages that Clarke and Cook produced knocks that mattered. When they were mere batsmen, Clarke and Cook churned out impactful performance with the ease of master potters. But captaincy often sucks out batting skills from batsmen and the end begins as soon as they are heralded: it has turned out to be the same for these men. ALSO READ: Battered, bruised but not beaten, Clarke wins hearts with ICC World Cup 2015 triumph

To understand the abovementioned statement, let us consider their performance in last year-and-a-half. Clarke has scored two centuries since January 2014 and so has Cook. In this period, Clarke led a team that wanted to prove the 5-0 thrashing of England was no flash in the pan, and Cook has done his best to hold together a team which had no direction.

Clarke may have been slightly ahead of Cook in this regards, for having played the innings of a lifetime — the 161 not out against a merciless South African bowling attack at Newlands that included a rampant Morne Morkel — a knock pulled off with a fractured shoulder which was discovered later.

Clarke and Cook are captains today, but will they hold onto their positions post The Ashes 2015? Clarke may face wrath of Australian media and public for leading a bunch of World Cup-winners to an Ashes defeat within months, and how likely is it that Smith may get the job to lead Australia? When Ricky Ponting was deemed unfit to lead, he had to make way for a younger and meaner Clarke. Before that, few Australian captains had relinquished captaincy and continued as a player. If it has happened in the past, how likely is it to occur again? ALSO READ: Alastair Cook goes past Graham Gooch: The saga of un-sexy efficiency

Fearing Australia’s firepower, a section of English media had already written about Ashes 2015 possibly being the last series for Cook as captain before it all began. What if the Australians had turned up in same mood they were in Ashes 2013-14 and rammed England in the first three Tests? It is not hard to imagine that English media would have massacred Cook with their mighty sword (read: pen). England might have had a new captain by now.

As of now, for England, it is all hunky-dory. The shine of youngsters and two wins at Cardiff and Edgbaston has somewhat distracted them off Cook. England are in a strong position and may go on to win the Ashes 2015. Cook will get a lifeline. But only for the time being.

As of now, for Australia, it is all about waiting for it. This team has the firepower to bounce back and win the remaining two Tests and win The Ashes 2015. If not that, then they can at least pin their hopes on returning from English shores with a draw, and retaining the Ashes urn.

But think of this: if any of Clarke and Cook is to leave his post Ashes 2015, what legacy would he be leaving? Clarke’s men are yet to play consistently the brand of cricket Australians are known for; they are yet to meet the standards which their captain sets for them. Cook has reigned on ruins for long, and England will feel the huge chasm when he leaves in their batting line-up to start with — which is erratic to start with.

One thing is for sure: none of the two will be leaving a team with strong legacies. Both Australia and England have massive shortcomings, and both Clarke and Cook have years of work left to do before their time is up. 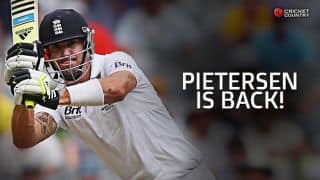