Clarke got a grand farewell from ODI cricket after leading his team to victory in the ICC Cricket World Cup final.

‘Battered, bruised but not beaten’*, Michael Clarke ended his One-Day International (ODI) career with Australia’s fifth World Cup win at Melbourne on Sunday. Devarchit Varma takes a look at Clarke’s final ODI, the build-up to the retirement and the legacy that he leaves with this exciting Australian team.

‘Pup’ is the term that Michael Clarke was christened with when he walked into an Australian team replete with players that do not bless the game of cricket often. Among the lions that Australia had in name of cricketers, Clarke was just like a cub. Clarke forced his way into the plethora of greats, learned his cricket, and then emerged as one of the finest batsmen in the past decade. Watch: Australia vs New Zealand Video Highlights

While the big names walked away, Clarke remained the only cricketer who had been a part of the teams that carried the spirit of ‘Australianism’. And today, as Clarke retires from the ODI format after 244 matches in 12 years, the 33-year-old cricketer is no less than a lion who has turned this young Australian side into world champions, infusing the spirit of winning in them. Read: ICC Cricket World Cup 2015: Top 10 spells

The ICC Cricket World Cup 2015 triumph comes as a reward for Clarke, who remained on strenuous journey especially since the greats walked away and Australia tumbled to new lows. The defeats to arch rivals England at home and away in Test cricket, Australia’s slip across formats and a poor outing in the ICC Cricket World Cup 2011 increased the pressure. Ricky Ponting and Michael Hussey hung around for a while, but the job was far from done when they too called it a day. Resultantly, Clarke was the only one left to shepherd the young brigade of the Australian cricketers, get them back to winning ways, and instil the ‘Australianism’ in them. Read: ICC Cricket World Cup 2015: Top 10 innings

While it may be argued that success in one format of cricket does not ensure the same in the other, seeing the broader picture in this case is very important — especially when there are only a few men who are enduring all the hardships. Darren Lehmann, the architect of Australia’s remarkable revival joined the team only about a year-and-a-half ago, and Clarke remained as someone who endured everything over the years. Having seen the lowest ebbs, the World Cup win is more than ‘deserving’ for Clarke. READ: ICC Cricket World Cup 2015: Australia marks out of 10

It was Clarke’s steely resolve and character that helped him sail through the rough waters. The going was never easy but ‘Pup’ remained resolute and determined, waking up each day to take Australia back to where they were, and today as he walks away from 50-over cricket after leading the side to World Cup title, Clarke’s job seems to be done.

To gauge how baffling it was for Clarke as an individual and captain, one does not need to go beyond a past four months. Unlike the emotionally-hardened Australian cricketers — commonly perceived as brats — Clarke is heavily emotional from inside and he does not hold anything back. The loss of ‘little brother’ Phillip Hughes, the battle to come out of the tragic loss, to put everything aside and focus on a World Cup win is never easy, and the matter got even tougher when all of a sudden, one day, Clarke’s body gave up, forcing him to convey the Australian public that they have may have seen the last of him.

Amid the emotional upheaval, putting together a fragile body which was deteriorating every new day, Clarke fought battles with Australian selectors who, as usual, were preferring ‘performance over promise’ and were pushing for him to take a call so that they could chalk out plans clearly for the ICC Cricket World Cup 2015. On his side, Clarke remained resolute, and even after admitting he may never play for Australia again during the Test series against India, ‘Pup’ roared back and that too in some style.

Clarke’s final innings against New Zealand in the 2015 World Cup final mirrored the past few months perfectly. There was promise, but no assurance. There was struggle, then the famous ‘dig in’, and then flamboyance towards the end.

Clarke was challenged by short bowling from New Zealand’s pacers, many that he let go — he had learned from the mistake made in the quarter-final against Pakistan. Clarke did not go for his shots for a major part of his 74-run knock, displaying the same deftness with which he held this side together in the past four months.

And Clarke did not bring forward the famous slashes, drives and slices for a major part of the innings, just like his Australia did not bring their ‘A’ game forward until when it mattered the most. If Clarke’s innings is divided in two parts — one wherein he is not his usual self and the other in which he lets himself loose — there is a lot in common with how his side played in World Cup 2015. Australia in the group stage was a pale shadow of what it was in the last three matches — dominant, ruthless and never once letting the opposition to take the game away. ICC Cricket World Cup 2015: Complete Coverage

* Battered, bruised but not beaten were the terms used by commentator and cricket expert Mark Nicholas, when Michael Clarke scored a fighting hundred at Cape Town, surviving a hostile spell from South Africa pacer Morne Morkel. 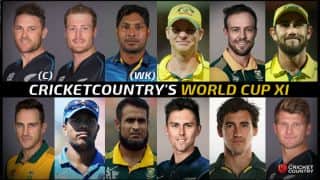